I (re) read SJ Watson’s debut novel Before I Go To Sleep  last year. It was a re-release to coincide with the launch of the movie starring Nicole Kidman and Colin Firth, but I hadn’t realised it wasn’t a new book until I opened it on my iPad. Nonetheless, I enjoyed it. Again.

Naturally I was eagerly awaiting Watson’s second novel, Second Life,  hoping the author didn’t fall into that ‘second book’ trap and offered something to match his debut work.

#Spoileralert – as he set the bar incredibly high with No. 1, Watson didn’t quite get there with this one, but it’s still a good read.

Julia and surgeon husband Hugh live a fairly contented life with (adopted) 14yr old son Connor. Julia’s younger sister Kate was only 16 when Connor was born and has been happy for Julia and Hugh to raise him as their own.

Kate’s still living in Paris when Julia receives the news that she’s been murdered. The attack was seemingly random – Kate was out late at night in the wrong place at the wrong time, but Julia struggles with the fact she didn’t do more to protect and support her younger sister. 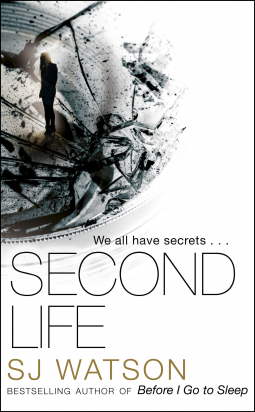 Julia’s befriended by Kate’s roommate Anna who sheds some light on the life Kate was leading just before she was killed and Julia’s surprised to learn her sister had become a frequent user of online dating and regularly met men she didn’t know for casual relationships.

Struggling with her guilt – Julia attempts to uncover her sister’s movements in the lead up to her death. And before we readers know it Julia is following in Kate’s footsteps attempting to ferret out anyone who might have dated or known her sister. She soon finds herself attracted to one of her suspects and becomes trapped in a world (and ‘second’ life) for which she wasn’t prepared.

Second Life  gets off to a bit of a slow start. We learn a bit about Julia and Kate’s childhoods and Julia’s own exploits when in her late teens and early 20s. The twists kick in midway through the novel, although some were relatively predictable. (And I wasn’t expecting everyone to live happily ever after.)

Julia – as the lead character – was bloody frustrating. She was a bit like an errant child: you could see the bad decisions she was making; she knew better but she kept going anyway. As a *slight* control freak I find that a little irksome as a reader… but that’s a personal thing.

I really hadn’t picked the final twist which Watson did very well. It put a lot of stuff in context, although I think there were still a few plot holes which I pondered during my usual periods of insomnia on subsequent nights.

Little warning: Be prepared to be left a tad bewildered after turning the last page as it’s another book eschewing the a cookie-cutter conclusion.

In summary – Second Life  is a good read – though unfortunately will probably suffer in comparison to Watson’s award-winning debut novel.

I received a copy of this novel for review purposes from the publisher via NetGalley.

Buy this book from Amazon