I was unwell a few weeks ago and had a couple of days away from work. Nothing major, but enough to make me not want to crawl out from under my pink flannelette sheets or – you know – wake up at all really.

On my first day at home, after sleeping for about 12 hours straight I tried to find things to do, which did not involve closing my eyes and snoring like an old man. I watched some shows I’d TiVoed, I wrote some posts for my other blog, I played on Facebook and Twitter, and finally I ran a hot bath and pulled out my library books.

I usually stick to authors I know and stalk the library shelves (or bookstores) awaiting the next new release, but in an act of desperation I’d borrowed an unknown.  I’d seen the book on the library shelves and the blurb on the dust jacket was tempting, although I wasn’t sure it was what I wanted for my mid week reading.

The plot of the novel itself is quite original, but it was the novel’s voice that drew me in. From the get-go.

Today I’m five. I was four last night going to sleep in Wardrobe, but when I wake up in Bed in the dark I’m changed to five, abracadabra. Before that I was three, then two, then one, then zero. “Was I minus numbers?”

“Up in Heaven. Was I minus one, minus two, minus three-?”

“Nah, the numbers didn’t start till you zoomed down.”

“Through Skylight. You were all sad till I happened in your tummy.”

“You said it.” Ma leans out of Bed to switch on Lamp and he makes everything light up whoosh. 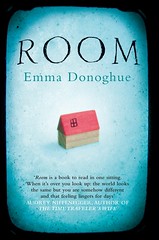 Room by Emma Donoghue introduces us to five year old Jack, and his mother who live in ‘Room’. It becomes obvious pretty quickly that Jack and his mother are being held captive in Room and we learn that his mother was abducted as a 19 year old college student seven years before.

The eleven square foot Room is Jack’s world. He has a television set, but believes Ma who says none of what he sees on there is real. And he knows that God’s face, which shines through the skylight, is Outer Space. In his world there is no outside, only inside: Room.

Jack and Ma’s captor visits most nights, and Jack spends the night in Wardrobe until he’s left his mother’s bed.

It is only when the captor’s behavior becomes increasingly unpredictable that Ma decides that Jack should know the truth and she finally tells him of the world beyond their four walls. And they start to hatch a plan for their escape.

I don’t have children and it’s a long time since my niece was five years old, but it is Donoghue’s delivery of Jack’s thoughts and dialogue which makes this book so poignant and so entertaining. Delivering the narrative from a five-year old’s perspective lends an amazing level of innocence to this tale of discovery.

Ma has been Jack’s world for five years and he hers. He is whippet smart and with only the company of an adult, he is wise beyond his years… in things that matter. 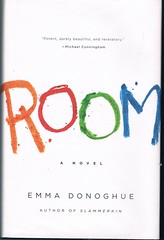 Jack’s world is so real. Everything in Room, for Jack, has a gender and personality and is a living and breathing thing. Donoghue’s writing gives this a level of believability through the absence of verbs and her use of nouns as verbs.

I’m not alone in my love for Jack and Irish-born Donoghue’s writing, with the book shortlisted for the 2010 Man Booker Prize.

In fact, I enjoyed Room so much that it is the only book I can ever remember reading that I wanted read it again straight away. Even now I am pining for Jack’s turn of phrase.  And it’s stayed with me for days; weeks even. Just as all beautiful and thought-provoking voices should.