I’ve long been a fan of Karin Slaughter. I loved her Grant County series and the Will Trent books. I also enjoyed last year’s release Cop Town… a somewhat depressing insight into the early days of women in policing in 1970s Atlanta.

But her latest, Pretty Girls, is probably my favourite book of hers in a long time. Perhaps ever!

Julia Carroll disappeared over 20 years ago. The local police assumed the headstrong girl ran away but her family believed the 19yr old college student had come to harm and the lack of closure tore the family apart.

Many years later another young woman has disappeared and it brings back memories for those affected by Julia’s disappearance.

Claire, married to architect Paul lives a charmed life. They’re happy and the book opens with their witty banter, which I found incredibly endearing and proof of their strong relationship. But tragedy strikes and it becomes obvious that much of their life together was built on a lie.

And then there’s Lydia—a former drug addict who’s now been sober for 17 years. She’s finally making something of her life and has a delightful daughter and devoted partner. But… the events of Claire and Paul’s life impact on Lydia in ways that may surprise readers. 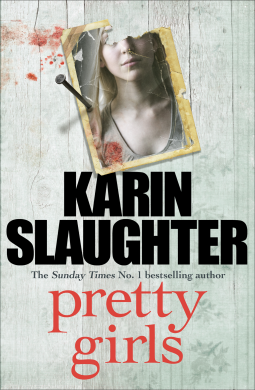 We also meet Julia’s father, Sam via journals he wrote to his missing daughter. He and wife Helen were the perfect couple and devoted parents. However Sam could not move on after Julia’s disappearance and became obsessed with finding out what happened to the daughter he failed to protect.

His soon-to-be ex-wife warns him against it.

“Knowing the details won’t make it any easier,” she warned me. “The details will tear you apart.”  p9

And she was right.

As Claire’s world starts disintegrating and she doesn’t know who she can trust, she turns to someone she never expected to see again. And what she uncovers not only links her husband’s death to the disappearance of her sister, but also exposes her to the very unpalatable world of violent pornography and snuff films.

Slaughter creates some great characters, particularly in Claire and Lydia. In fact I LOVED Claire who was stronger and more resilient than anyone gave her credit for. (And when I think about Slaughter’s writing resume, she excels in writing strong women.)

There’s secret after secret uncovered and we unsuspecting readers are toyed-with, as if a headless lizard at the mercy of my niece’s somewhat obtuse cat, Captain Jack Sparrow.

Slaughter’s writing is fabulous. I’ve never really noticed it before… which is usually a good thing as it gives way to the plot; but here it’s blunt and to the point. There’s something refreshingly addictive about it.

Halfway through the first series of movies, she’d found herself somewhat anaesthetised to the violence. Habituation, Paul would have explained, but fuck Paul and his stupid explanations.  p109

I suspect if I pondered longer I’d question the feasibility of some aspects of the plot, but I won’t bother doing that given I really enjoyed the journey we travelled.

Understandably some readers may find the topic of snuff films (ie. films depicting the death of its actors) extremely distasteful, but Slaughter handles the subject deftly and with equal amounts of horror and disbelief via her characters.

Pretty Girls by Karin Slaughter is an excellent read and one I definitely recommend.

I received an electronic copy of this book via the publisher, Cornerstone Digital, Random House UK and it is now available.