If anyone ever asks me my favourite movie my response is simple. It’s been a favourite for many many many years. In reality I probably need to rethink the answer, but my old fave is amazing enough – in my belief – to have stood up to the test of time.

I can’t remember when I first saw it, but I remember falling in adoration with the young Timothy Hutton.

Over the years I’ve watched it on occasion and it never fails to reduce me to a blubbering mess. I’ve also read the book which – incidentally – I love. I recently talked about book adaptations and the academy award winning-movie is one which does the 1976 book by Judith Guest justice. Indeed it possibly even overachieves in that respect.

I recently introduced my mother to the movie. I’m n0t sure she was as enamoured as yours truly, but it was a chance to remind myself what I loved about it and I wasn’t disappointed. The acting is brilliant and it doesn’t tug at the heart strings, but yanks the bloody things right out. 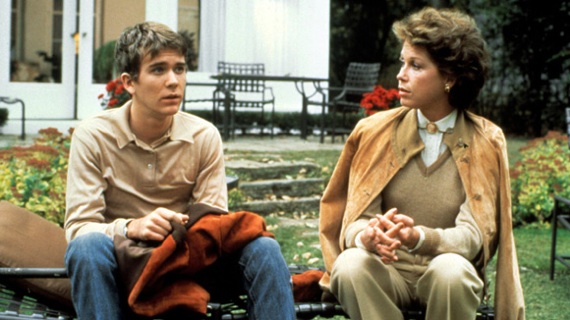 The opening scenes are very revealing. Conrad’s awkward; his father’s trying too hard; and his mother seems determinedly indifferent.

We soon discover that Conrad previously made an attempt on his life and has spent time in some sort of institution. His former school buddies are uncomfortable around him and he’s not enjoying things he previously loved. The only thing he finds solace in is choir practice. And that’s as much because of Jeannine (Elizabeth McGovern) as the actual music or singing I suspect.

As promised Conrad contacts a local therapist to continue with his treatment and Hirsch plays the chain-smoking straight-talking Dr Berger.

The movie is almost painfully slow but not plodding. The music, the performances and the script are stilting, awkward and uncertain. On purpose. The characters look uncomfortable. We feel uncomfortable. Conrad and his mother aren’t fighting but seem to be completely out of sync. Beth and Calvin’s relationship appears strong but there are cracks. She’s irritable and seemingly indifferent and he’s trying to return to normality. Calvin wants to talk about what’s happened to their family, Beth won’t.

We learn Beth wasn’t always like this; that her smiles once reached her eyes. She loved her first-born son Buck who recently died in a boating accident. One which Conrad survived.

We’re drawn into the family dynamics, watching its disintegration, while hoping for a happy ending. We try to sympathise and understand, but take sides nonetheless.

It wasn’t until I rewatched Ordinary People  recently that I realised Pachelbel’s Canon  features prominently. I know it’s a favourite for wedding marches, but it’s held a place in my heart because of this movie. The first time I consciously heard it I was walking past a group of violinists busking and completely taken aback. I had no idea what they were playing and didn’t understand why it was so familiar. And so poignant.

Strangely the movie never seems to appear on television and I recall the DVD being hard to find – but if you have the chance I suggest you read (and watch) this masterpiece.

PS. I also developed a bit of a crush on Donald Sutherland after watching this… one which has remained with me!