One Summer in Venice isn’t my usual reading fare. I assumed it to be very Eat Pray Love-ish… and it is. A little. I’m sure the haters will view this quest for happiness as a selfish act, while others will understand the need (and envy the opportunity) to take time out and consider the life you’re living.

Addolorata (Dolly) Martinelli—although too young for it—is having a mid life crisis. Less happy than she should be for someone with their own business, husband and child; Dolly feels like something is missing. She compares herself to her overachieving sister Pieta and her organised and contented existence and feels she suffers poorly in comparison.

Things come to a head when her restaurant—one her father passed to her when he retired—receives a savage review. Expecting sympathy from her husband Eden (a builder currently unable to work because of an injury), he instead tells her she’s self-absorbed and suggests they have time apart. 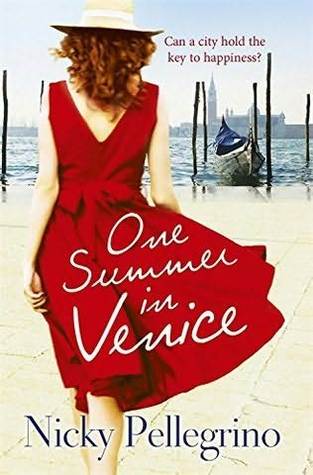 Knowing Dolly is on the edge Pieta gifts her and daughter Katia a week-long trip to Venice, but when Katia refuses to go Dolly travels alone. And she’s mostly miserable until she meets some locals who slowly but surely draw her into their lifestyle.

When Eden tells her he wants to go ahead with their separation and Dolly discovers her father’s returned to the restaurant to ‘get things back on track’ she decides to remain in Venice for the summer. Dolly is egged on by the mysterious and glamorous Coco, who suggests she take the opportunity to identify what really makes her happy. So Dolly starts making a list.

I was surprised how much I enjoyed this latest novel by Nicky Pellegrino. It’s my first of the English-born, Italian-visiting New Zealand-dwelling author’s books so I wasn’t sure what to expect.

Dolly could easily come off as navel-gazing and self-indulgent, but she doesn’t. Her quest for happiness isn’t naff or roll-your-eyes-trite. At one point in the novel she tries to describe how it differs from goals or desires (such a money, family or a good job)….

Just because you want these things doesn’t mean they’ll make you happy.

Soaking up Venice’s culture, cuisine and customs Dolly starts to identify—mostly through experience—what makes her happy. I must confess I did think some were a little ridiculous (dogs and tango?), but who am I to judge given my own (current) list would feature vanilla diet coke, hot chips, television and reading?! In addition to family and friends. Of course. *ahem*

Of course this fabulous new world of Dolly’s cannot last forever… or can it?

The novel’s written in first person but slipped into second person a few times in the last quarter as Dolly addresses us directly – as if sharing a secret. There’s obviously nothing wrong with this, but I noticed it each time it happened and it threw me a little.

I enjoyed the cast of characters offered up by Pellegrino. Dolly was eminently likeable and Coco very charismatic. Like Dolly I was keen to unlock the secrets of Coco’s past and better understand the flamboyant older woman. The canals, cafes, food and tango all added a lot of texture to a novel which was less of a people-based romance and more one of place.

As for any negatives… The logic lover in me wondered how someone struggling financially could manage to live without an income for a few months; and I was a little disappointed in the ending. I don’t think I expected a lightbulb moment of evolution from Dolly and I’m not sure what I wanted to happen, but well…

Despite that I enjoyed this book and didn’t want to put it down. It’s just under 300 pages and I easily read it in a night. I’ll possibly now even check out some of Pellegrino’s other work. I’ve always wanted to go to Tuscany so if something’s set there and it’s as vivid as her portrayal of Venice I’ll be able to visit vicariously through her words!

One Summer in Venice by Nicky Pellegrino was published by Hachette Australia and is currently available.

Buy a copy now from Booktopia (Australia) or Amazon (International).