Obsession in Death  is JD Robb’s 40th Eve Dallas / Roarke novel. Robb’s first book in this series, Naked in Death,  was released in 1995*, which averages out at two books a year. Impressive for any author, but more so for one who has a day job! 😉

I love this series. They’re one of my comfort reads. I own a heap (though probably not even half!) and have read most more than once.

I’m going off-script to talk ‘rating’ first. I’d be happy never to ‘score’ a book but sadly sites like Amazon, Goodreads and The Reading Room like stars. I’d generally rate books like these a 3 – 3.5. They’re entertaining and fun. However, for reasons unknown to anyone but me, I’d rate the entire series a 4 – 4.5 (ie. practically a ’10’ in my hard-arse rating book!).

JD Robb (perhaps better know as Nora Roberts!) has offered we readers consistently good brain-fodder over the past 20 (faarck, 20!!!) years. I personally don’t believe other similarly prolific authors (James Patterson comes to mind) can match Roberts when it comes to balancing quality and quantity.

Meanwhile, back to her latest…

I won’t give a lot of backstory and would recommend newcomers to Robb read my earlier review of the entire ‘In Death’ series; however… while her writing and plots are consistently solid, it’s her cast of characters who reel me in. Every. Single. Time. 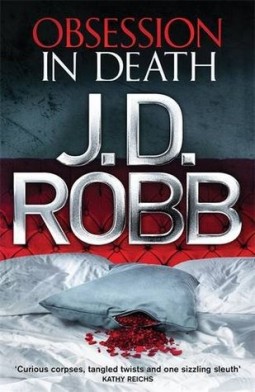 In Obsession in Death,  our favourite traumatised-orphan-come-detective, Lieutenant Eve Dallas has a stalker of sorts; someone who’s methodically killing those who’ve proved irksome to Eve over the years. The killer then presents their macabre gifts to Eve, like a cat with its bloodied mouse.

Eve and her merry band of helpers – mega rich husband Roarke, offsider Detective Delia Peabody and usual cast of NYPD faves – attempt to track down this person who believes they have a special bond with Eve, before they turn on her or her loved ones.

You’ll be relieved to know that Robb / Roberts has obviously been reading my blog posts because there’s less graphic-but-not-graphic sex scenes in this book. They’re there but instead of trite and oblique mentions of Roarke’s manhood and Eve’s warm and welcoming place (generic examples, rather than quotes 😉 ) we’re just given the gist. Thank god.

I occasionally wonder if I should be embarrassed about my addiction to this series. They’re a bit cliched and I cringe when Roarke has to carry an exhausted Eve to bed, tell her what to eat and the like; but then I find myself getting weepy when Eve and Roarke’s dour butler Summerset reluctantly exhibit concern for the other. Like I said, predictable but awwww….. *sobs*

I had a conversation about the series recently and we wondered where it would go. To date the 40 books have only spanned a couple of years but, while we’ve seen some character growth and changes in our leads, they’ll probably need to face some other crises sooner rather than later to keep we readers on our toes. I’m thinking a child – perhaps not Eve giving birth cos that would give them too long to become accustomed to parenthood – but a child foisted upon them would certainly liven up things. (In case you’re reading Nora!)

Obsession in Death by JD Robb will be released in Australia via Hachette on 10 February 2015.

PS. If you’re a JD Robb fan, make sure you follow her page on Facebook as they’ve been doing a recap / countdown thingy in the lead up to the release of #40!