The night before heading to my local Mary Ryan’s Bookstore to hear from Aussie author Inga Simpson I was reading through some recent Queensland Writers’ Centre (QWC) magazines which – coincidentally – advertised a ‘cultivating place’ workshop Inga teaches for the centre.

I’d also read a number of reviews of Inga’s work and this post (on details and description) she wrote for QWC.

Indeed one of the things I took away from listening to Inga was that it seems – for her – being able to position her readers ‘in’ the story is as important as the story itself. Many other attendees at the ‘coffee and conversation session (who were more nature-loving) commented on the authenticity of the settings in which her novels unfold.

You’ve probably already guessed, I – on the other hand – really do not notice that sort of stuff. I know nothing of nature and fail to appreciate the beauty of a novel’s setting – whether it be a tropical island or a big old castle. Sadly I’m all about the * narrative and moving the plot forward. 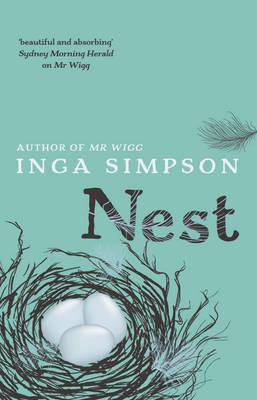 Inga’s debut novel Mr Wigg  was extremely well-received and her latest release, Nest  is following suit. I bought Nest  at the gathering and then read it in two fairly short sittings. The depth of descriptiveness and detail about flora and fauna would usually bore me silly but – although I know I skimmed more than I should (!) – I could appreciate the beauty of Inga’s words.

Like Tim Winton’s passion for the beach and WA life I got a real sense of the coastal hinterland in which Nest  is based.

In fact, nature-lovers would really really REALLY appreciate this novel. The ‘place’ is as important to the story as the plot and characters. Indeed, the setting is probably as big a part of the story as our protagonist Jen.

Jennifer Anderson (Vogel) has returned to her hometown, living in a dilapidated cottage in the hinterland, surrounded by nature. The former art teacher (and artist) is coming out of a difficult breakup and dealing with the recent death of her mother. Of course returning to her home territory has also raised reminders of her childhood, particularly the disappearance of her best friend Michael and the sudden departure of her father, which occurred at the same time and raised suspicions of his involvement.

Jen’s semi-retired and focussing on her art. She’s taking a break from everything (something I could definitely relate to) though tutors / mentors a young boy, Henry. When Henry arrives one day upset because of the disappearance of a school friend, the similarities to Michael’s disappearance are eerily familiar.

The event is akin to a catalyst for Jen who realises she can’t avoid her past forever and finds herself reaching out to old friends and confronting the events (and secrets) of her childhood.

The book’s written in third-person but from the viewpoint of Jen and Inga gives us an amazing insight into the slightly broken woman with a beautiful soul. Much of the novel centres around Jen and her surrounds. It’s very contemplative and reflective, but the missing girl and events of Jen’s childhood ground the novel. In some ways they’re in stark contrast to the meditative natural world in which Jen tries to exist.

Simpson writes beautifully so even I – with no appreciation of nature and prone to skim over such stuff – could recognise the melodic rhythm of her words, some of which really spoke to me:

Now she was just a husk of a woman. Orphaned. Childless. Little more than bone and sinew and skin. Without feathers to hide beneath or a song to sing.

At the author event Inga told us the novel was inspired by the 2003 real-life disappearance of 13-year old Sunshine Coast boy Daniel Morcombe. She said – at the time – something which interested her was the impact his disappearance had on the children left behind – and that’s very much the theme of Nest:  it’s about the ones left behind.

Nest by Inga Simpson was released via Hachette Australia in August 2014.

* Apologies – pop culture reference to the song by Meghan Trainor.