I read this debut novel by Michelle Adams in a sitting. It kept me interested enough that I didn’t put it aside. It didn’t ‘quite’ hit the mark for me… in terms of the ‘harrowing secret’ promised, but did throw up a few unexpected twists at the end.


My name is Irini. I was given away.

My name is Elle. I was kept.

All her life Irini thought she was given away because her family didn't want her. What if the truth was something worse?

One family bound by a harrowing secret.

The backcover blurb is a bit light on, so I’ll add some more here.

Irini was handed over to her aunt and uncle when she was three years old. They were compensated for their duty, but never particularly loving towards Irini who grew up with a hip disfigurement (she calls herself a cripple and often walks with a limp).

Elle appeared in Irini’s life when she was the latter was 9yrs old and Elle, 13. Even then Elle was menacing and protective. Irini kept Elle’s visits a secret until an event when she herself was 13 (and Irini 17) and her aunt and uncle moved to escape Elle’s reach.

We hear about Elle’s nefarious deeds. She killed a dog. She acted out. Slept around. Irini has spent much of her life escaping her older sister. And when we meet them they’ve not seen each other for six years. Elle is 37. (Incidentally I was assuming they were in their twenties until Adams dropped that in!)

Irini’s a doctor. But – although it’s a cliche – she’s haunted by her past. She’s fairly sure her partner, Antonio (a waiter) is only with her for her money, which he spends freely as his own. And she’s in fear of her sister finding her. Again. 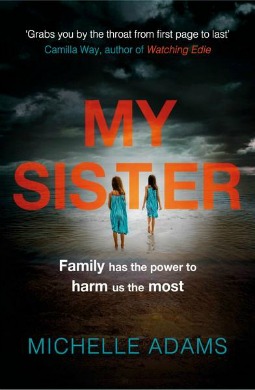 And she does, to inform her ‘their’ mother has died. Irini’s not particularly disturbed as she only saw her mother once since her parents ‘gave’ her away. But she can’t say no to Elle so returns to Scotland (from England) to the family home for the first time in over 30 years. She has an ulterior motive, you see… her father is still alive and she has to know… why did they give her away?

Things inevitably go south once Irini is with her sister. Elle is obviously unhinged (a technical term, cos HELLO?! Undergrad Psych double-major!) and (in fact) Irini is actually surprised to discover her sister did not murder their mother.

Once ensconced in the family home Irini gets a sense there’s more to the story of her departure 30 years earlier. Her father seems ashamed in her presence and not disgusted or disinterested as she expected him to be.

And I realise what is happening here. All those years without Elle have allowed me to forget who I really am. I pretend to be somebody other than that little girl who was abandoned. But now that we are reunited, I exist. I came here for the truth, and now, within minutes of being with Elle, I have the first part of it: I will always be that little girl, the one they decided they didn’t want. p 20

Of course Irini’s plan to confront her father and then leave goes awry and the family’s secrets follow her home to England.

I have to admit I think I expected a bigger ‘secret’ or ‘reveal’. It seemed pretty obvious why Irini was given away, but perhaps I had the benefit of hindsight.

I did enjoy Irini’s growth. Understandably she had a pretty big chip on her shoulder and her sense of worth almost non-existent when we first meet her…. but that changes.

This debut novel by Adams was well-paced and shows great potential, so I look forward to seeing what comes next.

My Sister by Michelle Adams was published in Australia by Hachette and is now available.