The book kicks off with Milo regretting having not consulted Alex on a case which seemed like a no-brainer — a woman strangled and stabbed. A crime of passion, assumed Milo and waited to pounce on the victim’s easily-agitated boyfriend…. who ended up having an alibi.

The case remains unsolved months later when Milo requests Alex accompany him to the scene of another murder. This time a woman’s been shot in a parking garage. She’d just left her lawyer’s office and again, the solution seems obvious — the new victim had been bickering with her ex-husband over their business for years. But in a deja-vu-ish twist… he has an alibi.

Just as I was expecting a far-too-obvious Strangers on a Train  scenario, things take a turn as another victim turns up. 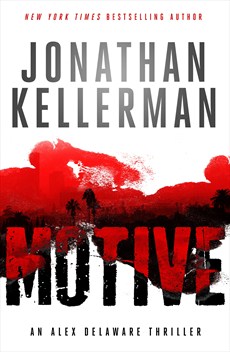 I wondering why Milo (and umm… Kellerman obviously) had brought Alex in until the seemingly separate cases are linked through the killer’s signature, though the women themselves have little or nothing in common.

As usual Kellerman adds a few twists throughout the novel to keep us guessing while throwing in multiple suspects and red herrings. Alex and Milo continue to be solid leads but I felt their characters were both a little underdone / stale in this latest book.  Milo seemed flat — partially his frustration over the cases, but he lacked some of his usual grumpy pig-headedness and the bullish behaviour we’ve come to love.

And while I’m relieved Alex’s lover Robin is only a fleeting presence in Motive  (cos I find her tediously boring!) we also didn’t get our usual insight into the more complex psychological aspects of the crime. Alex’s role felt minimal in this particular case — almost like window-dressing.

That all being said however, Motive  was a good read and I felt obliged to get through it and uncover its secrets as quickly as possible. 😉

Motive by Jonathan Kellerman, published by Headline Books and released in Australia via Hachette, is available from 10 February 2015.