My friend, KC, is the most optimistic and motivated person I know.  We met a few years ago at a beginners’ writing course.  While I have remained a beginner (and am actually going to repeat the course this year!), KC has gone from strength to strength.  She has had many-a-feature published in magazines and is awaiting the release of her first children’s book.

Though KC is (obviously) very talented and dedicated, she once told me about a book which helped release her inner creativity and set her onto a more confident path.

The Artist’s Way by Julia Cameron and Mark Bryan offers a 12-week step-by-step guide to becoming more creative and productive – in whatever it is that you want to do.  In true ‘me’ style however, I floundered somewhere midway through the book, having not done my homework or followed through on some exercises.  I found the book under my bed recently and dusted it off (not sure if it says something about me or my cleaners?!) and put it aside to potentially revisit.  I have never been into self-help books and rarely resort to non-fiction of any sort.  However, happening upon this book again got me thinking about the usefulness of taking bits and pieces (or what you need) from others’ offerings.

A couple of the key tools in The Artist’s Way are the Artist’s Dates and Morning Pages.  I have to admit I never really took to the Artist’s Dates.  I live alone and already spend much time pondering my life and doing whatever it is that I want to do.  But the Morning Pages I found quite useful.  Eventually.  That is, when I stopped thinking about whether what I was doing was ‘right’ or ‘wrong’.

The idea behind the Morning Pages is that you are supposed to write three pages first thing each morning.  Long-hand.  A brain-dump as such.  To refresh the mind and find whatever is lurking in there, says Cameron. 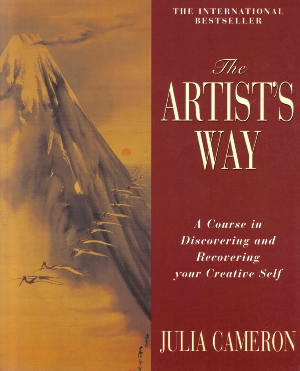 Initially I worried that the Morning Pages were akin to a diary for me.  I worried that what I was spewing onto the page was a self-absorbed diatribe rather than insightful and poetic revelations.

But I soon came to learn the difference.  When keeping a diary, we write what we need to, or want to, and then we stop.  With the Morning Pages you have to keep going until you have filled three pages.  Having to stretch my mind to think of things to write about meant that my morning blither ended up becoming admissions of things I wouldn’t normally include in a diary entry.

So, while I managed the Morning Pages, some of the other exercises led to my downfall.  One of the (many) tenets in the book was that to be more creative, you have to enjoy life and have more fun.  I failed miserably in trying to identify things I do now which I would describe to be ‘fun’.  I did however, manage to identify a number of things I did as a child.  Even at this lofty age, I could remember fun times and how the smallest of things could incite hours of entertainment and interest.

Though formal practice and training became a chore, I identified the ‘act’ of going and having basketball shots something that I found peaceful and cathartic as a teenager.  The nearby basketball courts were a place I could be alone with my own thoughts as I threw a big round ball (more often than not) into a slightly bigger, but still round, hoop.

So, the homework exercise should have been easy.  It didn’t take a rocket scientist to recognise that the mere act of ‘having shots’ (as I refer to it) could assist in getting me in touch with my inner child, unleashing stifled creativity and lead to a whole new me.  Or something.

Day after day, then week after week passed, with me not having bought a basketball or done anything about this piece of homework.  Eventually The Artist’s Way (and all it offered) was foisted out of eyeshot under my bed and I retreated back into my uncreative world.

But…  Perhaps it is not too late.  A month ago (and just over one year later) I found myself in a large discount store staring at basketballs for $20.  I tested them all to find one sufficiently pumped (after all I don’t have a pump and if I had to pump the damned thing up, another year may have passed).

Another few weeks passed.  But, 5 days ago, feeling unsettled and thwarted-in-every-possible-way (and lolling in bed sulking – about what exactly I don’t know), I jumped in my car and found myself at a nearby half-court.  Though I once played and practised a lot, my initial offerings to the God-of-Basketball were somewhat pitiful.  I had no ball control.  My shooting action felt ugly.  But… no one else was around to see.  I had music blaring in my ears compliments of my iPod and I was free.  Free to play.

I have been twice since.  My ball control still sucks.  I am incredibly unfit and grapple with the guilt of ‘having shots’ rather than doing some real cardiovascular exercise like trudging up and down hills.   But… Today I almost made it ‘around the world’ (shooting from each point of the keyway [key]) without missing.

I hope to continue going.  Once or twice a week would be fine.  Soon I will feel more confident.  I will move further from the keyway; then to the 3 point line.  But it won’t be about ‘how well’ I do.  It will just be about ‘doing’.  About ‘being’.

And, I am going to dust off The Artist’s Way again.  Work through it.  Do what I like.  Skip over what I don’t.  Who knows what will come next?