I said last year that Kylie Kaden’s debut novel, Losing Kate,  wasn’t my usual reading fodder. I used to shy away from Aussie authors, reticent to read about happenings in my own backyard. However… over the past year I’ve read a STACK of Australian novels and my two faves from last year were both by Aussie writers. So it seems, I may have been a little hasty in my assertions about what does, and does not, capture my fancy.

Kylie Kaden’s new novel, Missing You,  is again set in Brisbane. And I didn’t mind at all. (I’m sure she’s breathing a sigh of relief at that!) Rather than cringe at the mention of the University of Queensland Great Court and infamous O-week Toga Party, I found myself smiling knowingly. (I am surely evolving as a person! 😉 )

In fact, I loved Missing You  so much I read it in a night.

I have to admit, the back cover blurb didn’t jump out at me: Young couple meet, fall in love and get married—though he’s a bit of a louse. Their son is autistic, putting a strain on their marriage. The hubby leaves. The wife then disappears one night leaving the child with her father.

I imagined protracted scenes about their great (albeit mismatched) romance, then a lot of medical stuff and overwhelm relating to their son and so forth before then diving into the ‘has she run away or did someone make her disappear?’ scenario. But it wasn’t like that at all. Thank god for the unexpected!

Other than a quick teaser the book dives straight into it, and we’re in the head of Patrick, who’s been left with four-year old Eli.

Seventy year old Patrick raised his two headstrong daughters—Aisha and Pip— on his own after his wife left. He remains close to them even though both have now finished University and gotten on with their lives. He’s less enamoured with Aisha’s pretty-boy husband who he doesn’t know particularly well. But Patrick’s old school and doesn’t believe Ryan pulls his weight financially—or as a husband and father. 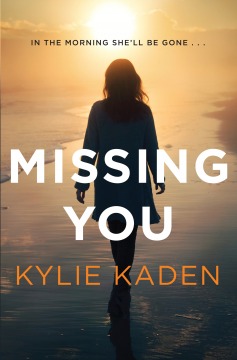 The couple have separated and Aisha’s at her father’s place when she gets a call from a friend in need and takes off to help, leaving Eli with her father. When she doesn’t return that night or in the following days Patrick and Pip become concerned and eventually involve the police. The police initially assume Aisha left of her own free will, needing a break; so fail to take things seriously until they find her abandoned car with bloodstains on the seat.

In the meantime however, Patrick finds himself the carer of four year old Eli. I don’t know a lot about autistic spectrum disorder, but I gather Eli falls somewhere on the spectrum (as do many of us apparently!). I actually like that the book downplays the label. Patrick however is old school (even more anti-label) and has always believed that Eli just needed a firm hand to whip him into shape.

The novel predominantly alternates between Patrick in the present; and Aisha and Ryan’s relationship over a five-six year timespan. Through shared snippets we learn of their meeting, romance, marriage and pregnancy.

The couple aren’t who I’d assumed them to be from the back cover blurb. I expected two feral miscreants bringing trouble upon themselves. However Aisha’s a law student when they meet and goes on to graduate and practice. And Ryan’s a sales rep; so far from the no-hoper I was expecting. There’s over a decade age gap between the pair however, and they want very different things. Ryan’s still keen to travel and wait a while before settling down; but (inexplicably in this day and age and although she’s only 21 when they meet!!!) Aisha’s priority is to have a family.*

The couple’s relationship is complicated by Ryan’s difficult history with his twin brother and an on and off again girlfriend; while Aisha’s ex-lover (and former professor) pops up to cause problems.

Interestingly I enjoyed being in Patrick’s head and his time with Eli as much, or even more than, I enjoyed the unfolding story of Aisha and Ryan.

By the time Patrick’s had Eli for a week the pair have become used to each other and adopted a routine. Patrick continues to eschew labels but his patient, loving, and old school trial-and-error way of caring for Eli and the growth in their relationship was (for me) one of the strengths of the novel. 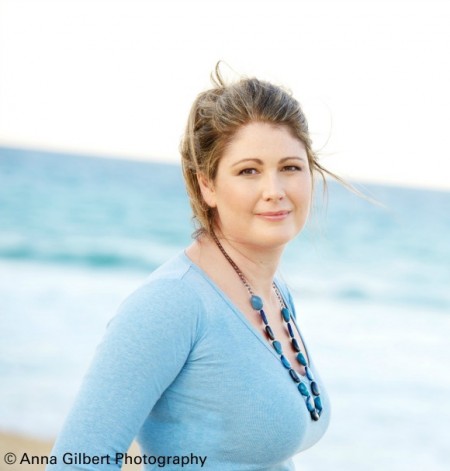 I felt the unveiling of the final mystery was a teensy bit anticlimactic (and frustratingly unfulfilling for this lover of closure!), however it’s not a mystery / suspense which relies solely on a big ‘reveal’ at the end.

Kaden’s structuring of the book—allowing us to learn a little at a time—is what kept me turning page after page. Her cast of characters was strong (Patrick and Eli being my personal faves), including those we’re meant to dislike.

Missing You  is a fabulous second novel from Kaden and I cannot wait to see what she does next.

Missing You by Kylie Kaden will be released via Random House Australia on 1 April 2015.

*This seemed unrealistic to me but perhaps I hang out with the wrong people! 😉

I’m participating in a blog tour to promote Missing You. Please take the opportunity to check out the other participants. 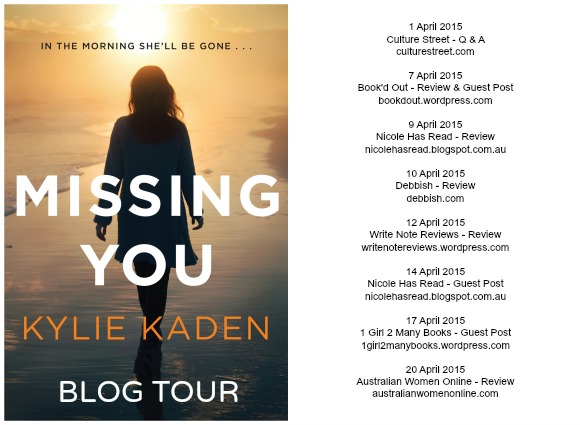 Does Missing You appeal to you?

As it’s Friday I’m flogging my blog With Some Grace today.