So.. The only thing you really need to know about this book is that I LOVE AMOS DECKER!

What a fabulous new lead character David Baldacci has given us. I’ve read most of Baldacci’s previous books and series and—without a doubt—Decker is my fave protagonist. And I say this after only spending one night with him. So let’s just say…. I’m hoping for many more. *Inappropriate sexual entendre intended* 😉

Amos Decker is a former police detective. We meet him as he’s climbing out of the hole he’s found himself in since his wife and daughter were killed. After leaving the police force and hitting rock bottom sleeping on park benches, Decker’s set up a PI business and taking any case which pays.

We soon learn Decker’s not your average guy. An accident during his short-lived professional football career twenty years earlier resulted in a condition called hyperthymesia, which means he can remember EVERYTHING. Like Poppy Montgomery in the relatively short-lived TV show, Unforgettable.

And now… sixteen months after the loss of his family someone has walked into the Burlington police station to confess to their murders. Decker—conniving time alone with the suspect—doesn’t believe him to be guilty of the crimes. He does however, set Decker’s spidey senses on edge. 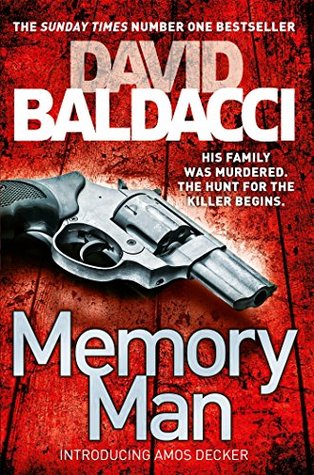 A mass shooting at the local high school, distracts the police and—surprisingly—Decker. Despite the fact his life’s a mess, his observation and investigative skills are called on to assist his former colleagues.

Obviously I loved this book. I read it in a (long) sitting. Decker is a complex but very likeable character, and the support cast—who I assume we’ll see again—were also well developed and complemented Decker’s lead.

The plot was strong and a few twists and turns kept us guessing. Not all of the logic entirely made sense in my little mind (the underlying motive for the murder of Decker’s family, for example), but I didn’t care. This is all about Decker and his ‘mad skillz’. Thankfully the book’s being referred to as Amos Decker #1, which is how I know there’ll be more to come and I for one am v.excited.

Memory Man by David Baldacci is published in Australia by PanMacmillan and now available.

Buy a copy now from Booktopia (Australia) and Amazon