For a lover of logic I sure am open to the idea of not-so-scientifically-tangible things like fate and alternative universes. Because I’m prone to obsess and overanalyse things however, these kinds of ideas screw with my mind as I try to explain their feasibility and / or legitimacy.

A few years ago I wrote about the whole Sliding Doors scenario (a few times) and when I first started reading Maybe in Another Life by Taylor Jenkins Reid (TJR) I metaphorically kicked myself for requesting the book and thereby opening myself to yet another mindf*ck!

I commented on my Facebook page at the time…

… the last thing an over-thinker like me needs is to ponder on ‘the paths not taken’.

However, I’d heard good things about about the book and TJR so I bravely battled on—trying to ignore my own nagging ‘what ifs’!

At the age of twenty-nine, Hannah Martin still has no idea what she wants to do with her life. She has lived in six different cities and held countless meaningless jobs since graduating college. On the heels of leaving yet another city, Hannah moves back to her hometown of Los Angeles and takes up residence in her best friend Gabby’s guestroom. Shortly after getting back to town, Hannah goes out to a bar one night with Gabby and meets up with her high school boyfriend, Ethan.

In concurrent storylines, Hannah lives out the effects of each decision. Quickly, these parallel universes develop into radically different stories with large-scale consequences for Hannah, as well as the people around her. As the two alternate realities run their course, Maybe in Another Life raises questions about fate and true love: Is anything meant to be? How much in our life is determined by chance? And perhaps, most compellingly: Is there such a thing as a soul mate?

Hannah believes there is. And, in both worlds, she believes she’s found him. 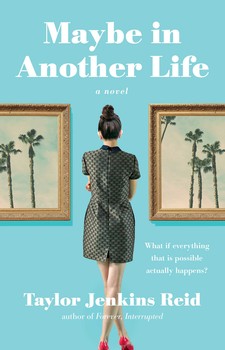 This book is very cleverly written as TJR doesn’t need to preface each alternating chapter with ‘which’ of Hannah’s worlds we’re in. It’s written in a way that it’s obvious. Quickly and easily.

A key element in this book (for me) was the friendship between Hannah and Gabby. It was gorgeous and selflessly reciprocal. I’ve got some amazing besties but wondered if I’m as giving and unconditionally loyal as both women were to each other. Hannah lived with Gabby’s family growing up, so they’re like sisters and I think the bond is reminiscent of that—sisters who are friends… ie. The best of both worlds.

I marked a phrase, uttered by Hannah to Gabby which I particularly loved.

I found it interesting that TJR had some things take place in both timelines, but not everything. In some cases the same outcome was reached nonetheless (which had me pondering that concept of fate).

However, there were some major plot differences in the two timelines and I felt there was a lesson there… how an action or event can affect the way someone behaves, which affects how we perceive them. In addition to the idea that how someone behaves in a particular situation may not (for example) reflect who they are.

So while the plot itself is kinda light the underlying tenet and themes of the book are more complex. One of the characters says it best:

It’s entirely possible that every time we make a decision, there is a version of us out there somewhere who made a different choice. An infinite number of versions of ourselves are living out the consequences of every single possibility in our lives.  p. 318

Maybe in Another Life by Taylor Jenkins Reid was released in Australia by Simon & Schuster in July 2015.