Joseph Addison said, “Reading is to the mind what exercise is to the body.” And there are a million similar quotes espousing the benefits of being a reader. In my case, reading nourishes my soul. It allows me to be absorbed into another world where I get to experience things I’d never normally do or see. And… just for good measure…. I learn stuff.

For example, though I remember the Falklands War, I had no idea the Argentinians were involved. Of course then I looked at a map and realised why. D-oh! All of which only happened because I read Little Black Lies by Sharon (SJ) Bolton.

About a year ago I read the fourth instalment in Bolton’s Lacey Flint series, A Dark and Twisted Tide. I wasn’t completely enamoured, but that was predominantly because I was missing a lot of backstory.

I had no such problem with her latest offering, however, which is a stand-alone novel. 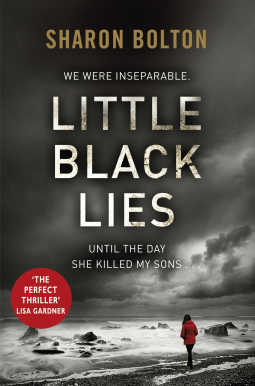 Catrin and Rachel were childhood besties. Both left the Falkland Islands for University in England after school, but later returned. Their lives were intertwined until the day Catrin’s two young boys died while in Rachel’s care.

The women have completely avoided each other in the small community in the three years since the tragedy. Catrin’s life has disintegrated… her marriage is over and she’s a shell of her former self. As for Rachel… well she’s still married and has three children.

We meet Catrin when the novel opens just days before the anniversary of her sons’ deaths. A marine biologist and respected community member, she’s been unable to move on and planning the ultimate revenge on her former best friend.

Her plans are temporarily put on hold however when a young boy goes missing. He’s the third boy to have disappeared in the last couple of years and some, such as Callum Murray—a hunky Scotsman who fought in the conflict and never returned home—believes the boys’ disappearances may not be accidental.

We spend the novel in Catrin’s head before moving to Callum’s and then Rachel’s, with some parts of the plot overlapping to offer us different perspectives.

Bolton does a good job developing Catrin and Callum, but we don’t meet Rachel until late in the novel and it felt a little too late. I think I would have preferred alternating chapters throughout, rather than distinct chunks. I was a little perplexed by some of Rachel’s actions and had I known her better I feel I would have better understood them.

But Bolton delivers in this tense suspenseful novel. Catrin’s angst and plotting work well against the backdrop of the missing children and there’s a consistently dark and sinister tone throughout.

There were a few too many red herrings thrown in near the end for my liking but my favourite part of the novel was the very end. I often say I like closure but I loved finishing this on a ‘WTF?!’ note!

Little Black Lies by Sharon Bolton was published by Bantam Press (Random House UK) and available from 2 July 2015. (And in Australia via Random House.)

I received an electronic copy of this book via NetGalley from the publisher for review purposes.