Australian Tony Cavanaugh is one such author. I seriously cannot believe I’ve not read any of his previous work because having picked up his latest release (and yes, again I’m reading something midway through a series), I LOVED it.

Darian Richards is an ex-cop, a good one. He did whatever it took to solve a crime and stop the bad guy. Whatever it took! But after sixteen years as the head of Victoria’s Homicide Squad, he’d had enough of promising victims’ families he’d find the answers they needed. He had to walk away to save his sanity.

Now Police Commissioner Copeland Walsh has tracked Darian down. He needs him to help clear an old case. The death of Isobel Vine. The coroner gave an open finding. An open finding that never cleared the cloud of doubt that hovered over four young cops who were present the night Isobel died.

Twenty-five years later, one of those young cops is next in line to become police commissioner, so Copeland Walsh needs the case closed once and for all. In his mind there is only one man for the job. One man who would be completely independent. One man who has never bowed to political or police pressure. One man who knows how to get the job done – Darian Richards.

Darian is going back to stir a hornet’s nest. But once Darian is on a case he won’t back off tracking down evil, no matter who he has to take down.

My addition: With mobsters, underage girls, cocaine and potentially-bent coppers at play Darian also calls on his favourite Queensland police officer to assist. 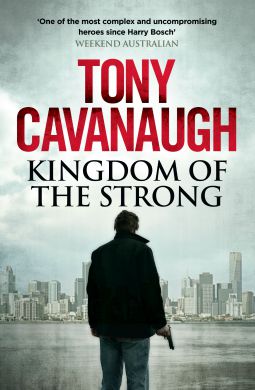 As this was my first outing with Darian I didn’t have as much of a chance to get to know him as those familiar with the series but I loved what I saw. He came across as authentic, likeable and very pragmatic. As was (fellow Queenslander) Senior Constable Maria Chastain. I don’t know their history and how they originally came to be working together but the pairing is great.

We quickly learn that Darian walked away from the job because he was jaded and it’s interesting that he describes Melbourne via the crimes which took place in its streets. It had me pondering a little on some of the past work I’ve done which has tainted or coloured the world around me.

The plot itself was great; it kept a good pace and I wasn’t distracted by any plot holes or over-the-top antics. I was initially slightly distracted by the changes in point-of-view. Readers aren’t told we’re switching heads, but it soon becomes obvious when we’re no longer in Darian’s mind. Once I got used to this it was fine and I liked the quirky naming of chapters.

I note Cavanaugh’s also a screenwriter and producer and this was evident in his gritty scene setting. I’m not particularly visual but even I was ‘there’.

Regular readers of my blog and my reviews won’t be surprised to know that I wasn’t entirely thrilled with the conclusion, but not because I didn’t believe whodunnit or thought it didn’t add up. It just felt a bit left field and I would normally have expected more breadcrumbs earlier. Of course if that had been the case I’d be bitching because I guessed the murderer way too early. #hardtoplease (Is that why I’m single I wonder?!)

With fabulous characters and a very real and believable plot I’m very impressed by the fourth in this series by Cavanaugh and keen to get my hands on more. (As an aside and given my usual whining about series and sequels, this didn’t overshare the outcome of previous novels in the series so I’m looking forward to reading them spoiler-free!)

Kingdom of the Strong by Tony Cavanaugh, published in Australia by Hachette, was released on 28 July 2015.