Each time I review one of Lisa Unger’s books I rave about what a fan I am of her work. And that remains the case. I have to admit I haven’t however enjoyed ‘The Hollows’ series as much as many of her earlier standalone novels.

The suspense is still there. The characters are great. We’re kept guessing and remain poised on the edge of our seats. However… I continue to struggle a little with the paranormal / supernatural elements. And yes, I do I know that’s more about me, than Unger’s work.


Twenty-year-old Finley Montgomery is rarely alone. Visited by people whom others can’t see and haunted by prophetic dreams, she has never been able to control or understand the things that happen to her. When Finley’s abilities start to become too strong for her to handle – and even the roar of her motorcycle or another dazzling tattoo can’t drown out the voices – she turns to the only person she knows who can help her: her grandmother Eloise Montgomery, a renowned psychic living in The Hollows, New York.

Merri Gleason is a woman at the end of her tether after a ten-month-long search for her missing daughter, Abbey. With almost every hope exhausted, she resorts to hiring Jones Cooper, a detective who sometimes works with psychic Eloise Montgomery. Merri’s not a believer, but she’s just desperate enough to go down that road, praying that she’s not too late. Time, she knows, is running out.

As a harsh white winter moves into The Hollows, Finley and Eloise are drawn into the investigation, which proves to have much more at stake than even the fate of a missing girl. As Finley digs deeper into the town and its endless layers, she is forced to examine the past, even as she tries to look into the future. Only one thing is clear: The Hollows gets what it wants, no matter what.

Unger’s written a novella trilogy about The Hollows (available as The Whispering Hollows) and standalone of sorts – Crazy Love You. So Ink and Bone is the second novel that features the small and slightly creepy town which comes complete with a mind of its own. (ie. Think Buffy, Sunnydale and the Hell Mouth!) #BTVSreference

We meet psychic, Eloise Montgomery in the first novella, The Whispers, which centres around the death of her husband and one of her daughters and the arrival of her psychic abilities. Although I very much enjoyed it, I struggled with the second novella (The Burning Girl) which jumped forward an entire decade, and completely skipped the third (The Three Sisters).

Eloise is back in Ink and Bone, but it’s her granddaughter Finley who’s grappling with her burgeoning powers and who’s working with PI Jones Cooper to investigate the disappearance of Abbey Gleason.

Unger includes a prologue which features Abbey’s kidnapping, but the story itself kicks off 10 months later. 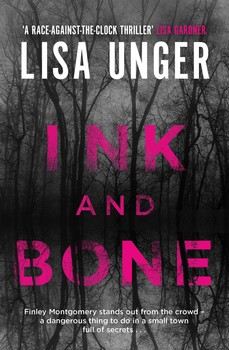 Finley’s having visions and hearing a recurring sound she can’t place and – once on the case – it’s not long before she and Jones realise Abbey may just be the latest in a number of girls who’ve disappeared in or around The Hollows.

The investigation into Abbey’s disappearance uses a combination of the old school piecing-together-of-clues as well as leaps in deduction thanks to Finley’s visions.

Like the previous novel in the series, Crazy Love You, you don’t really need to have read this book’s predecessors as Unger provides a bit of backstory. And I must admit I remembered little about Jones Cooper and Finley anyway, so it definitely wasn’t a problem.

I really enjoyed getting to know Finley and am keen to learn more about her as the series progresses. One of my criticisms of The Whispering Hollows novellas was that we didn’t spend enough time getting to know Eloise after she first got her powers.

Those more sympathetic to the paranormal or supernatural will probably enjoy this novel more than I did – although it really only impacted on the conclusion and Unger had included a nice little twist or two for those of us who like a surprise.

I received a copy of this book via NetGalley for review purposes.