Some who’ve read Alex Hourston’s debut novel In My House, have been disappointed that it’s not been more of an expose on the important issue of human trafficking. The marketing of disempowered and vulnerable women is certainly the genesis of the book, but I wasn’t disappointed when it focussed instead on the less-dramatic issue of human frailties.

Maggie lives a life of careful routines and measured pleasures. But everything changes when, walking through Gatwick a few days shy of her fifty-eighth birthday, a young woman approaches her and whispers a single word: ‘Help.’

Maggie responds, and in that moment saves a stranger, earning Anja her freedom and ensuring the arrest of a brutal trafficker.

But when the story gets picked up by the papers, Margaret is panicked by the publicity, as well as the strange phone calls she begins to receive.

Meanwhile Anja makes contact. She wants to thank her rescuer, but quickly insinuates herself into Maggie’s life.

As her relationship with Anja intensifies, Maggie begins to reveal, in increments, what it is she has been hiding. As a picture of her past takes shape, we are drawn into a slippery moral maze in which every choice is compromised. Maggie’s account is faithful, but she will keep you guessing about what really happened until the very end. 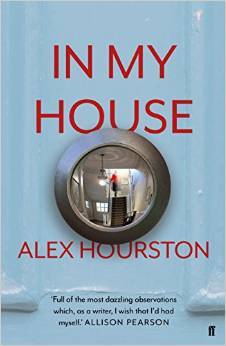 I know I read WAY too many suspense and psychological thrillers cos I remained poised throughout this novel for Anja to show her single-white-female stalker tendencies. I kept waiting for that hammer to drop. Waiting for something bad to happen.

Which it did; and didn’t.

It wasn’t the sort of novel I was expecting. But that wasn’t a bad thing. There was (indeed) an underlying tone, but it was one of intrigue rather than menace.

Anja’s an enigma. Innocent on one hand, but worldly savvy on the other. Most definitely a victim but complicit in ways she struggles to admit. Is her connection with Maggie natural and one inspired by a need for connection and unconditional love from a mother-figure; or is it more contrived?

Maggie also has secrets. She’s a loner and has purposefully isolated herself from others. We wonder why. Crossing paths with Anja and their burgeoning relationship reconnects Maggie with a world she’d left behind. One she’d shut out.

Slowly and surely Hourston shares snippets from Maggie’s past. But just when we think we have her pegged, there’s another surprise.

There’s little ‘action’ in this novel. It’s more a study of people and relationships. One which challenges our assumptions and prejudices.

Although not the book I expected I enjoyed this debut offering from Hourston immensely.

In My House by Alex Hourston was published in Australia by Allen & Unwin on 24 June 2015.