Reporter-turned private detective, Tess Monaghan is back in Laura Lippman’s latest novel and the twelfth in the series, Hush Hush. I somehow missed number 11, but fortunately it doesn’t matter as any backstory is mostly irrelevant. Which is good news for newcomers or occasional readers.

Tess is now mother to 3yr old Carla Scout and happy with partner Crow but her latest case—is challenging for a number of reasons.

Melisandre Harris Dawes was found not guilty (by reason of insanity) of murdering her 2mth old child 12 years before. After being released from an institution for post-partum psychosis she relinquished rights to her two older daughters and moved overseas. But now she’s back, and after some threats she wants someone to assess her security needs.

The money’s too good for Tess to refuse the case, though providing ‘security’ is not something she and partner Sandy Sanchez do best. It’s not long however, before her investigative skills are required following an attempted murder and one that’s far more successful.

In the mix are Melisandre’s two older daughters, Alanna and Ruby, her former husband Stephen and his new wife, Felicity (and mother to baby Joey). 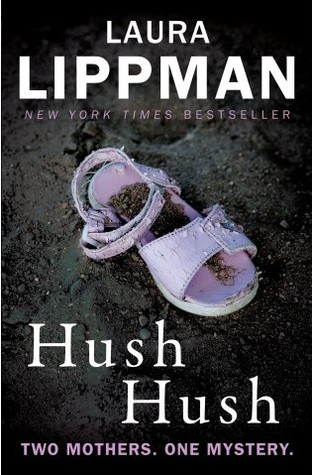 Hush Hush is a pretty standard thriller, but works well because Lippman continues to deliver quality on all fronts. There’s more to the plot than meets the eye and readers will find themselves pondering exactly WHO does WHAT. Tess continues to be a delightful lead character—vulnerable but feisty and we catch a glimpse of her fears about her own abilities as a mother… particularly when confronted with someone who committed a crime Tess considers unthinkable.

Interestingly Lippman puts us into Melisandre’s head early in the novel. She’s described as a bit of a control freak.

Melisandre liked to know, as much as possible, what was going to happen each day. She made a schedule every night, writing down the hour she would awaken, the times at which she would take her meals, what she planned to eat, television shows she might like to watch, time for reading. Her calendar could be mistaken for that of a very busy person.

I cringed as I read this, recognising my own behaviour. A lover of lists and with a need to know what’s happening I could seriously identify with this woman. Well, other than the whole filicide thing!

I would have liked to have been back in Melisandre’s head later in the novel because it felt like we disengaged with her character part-way through. This could—of course—be on purpose for reasons which become obvious when you read the book. My only other qualm with the novel was (that) the secondary plot around Tess’s ‘stalker’ seemed kinda irrelevant in the end.

All in all though this is another enjoyable read from Lippman and fans will be happy with where she’s taking Tess and her merry band of friends and family. Plus Carla Scout’s getting old enough now to get her own voice and that’s kinda cute. As someone with a 3yr old in their life, I wasn’t entirely sure Lippman nailed CS’s voice, but enjoyed the complexity she added to the mix.

Hush Hush by Laura Lippman will be released in Australia by Allen & Unwin on 22 April 2015.