When Jeff Cowan’s body is found in his bankrupt family’s former mansion, the police rule his death a homicide. His ex-wife Riley, however believes Jeff was murdered because he was attempting to track down missing money his imprisoned father swindled out of thousands of innocent people and looking into the suspicious deaths of several associates.

Not realising her own life will be at risk, Riley removes evidence to ensure the safety of Jeff’s mother and sister. These actions result in her crossing paths with Finn Bradley – seconded to the FBI to help recover the Cowan family’s missing fortune.

Naturally sparks fly between the pair and after several attempts on Riley’s life and a threat to her (ex) sister-in-law, Riley realises she needs Finn’s help to protect herself and her family from those trying to recover the missing money. 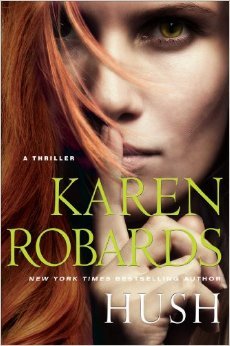 I often talk about the romance / suspense balance and – fans of the former will be thrilled that Karen Robards‘ novel firmly falls in favour of the first. Indeed, I can’t remember a time I saw the word erection (or a substitute) used more often in a novel.

I’m not a fan of sex scenes. I don’t know why. I’m not a prude but they make me groan and roll my eyes (and not in an I’m-having-fun way). I rarely read sex scenes I don’t find trite or clichéd. Something I realise is MY issue.

Most readers (however) would not think the same thing. I just get tired of men getting turned on by the mere presence of some beautiful, but flawed; strong, but fragile woman. #FFS #rantover

CONSTANT sexual tension aside, I actually read this book in a sitting. It’s an easy read and an enjoyable one. (Although possibly took me less time given I skimmed the sex, ear-nuzzling and knee-weakening kisses!) 😉

There are a couple of twists along the way, which Robards unfurls with expertise; and the main characters – Riley and Finn – are both likeable (despite the inappropriate moments of lust!).

The plot itself is fine, though I found myself a little lost at the end re the involvement of the CIA etc. I wondered if perhaps there was some additional storyline hidden amongst the sex scenes I skimmed!

Fans of Robard will enjoy this latest novel as will readers of romantic suspense looking for some reading fodder for the holidays! This is my reading bread and butter – the kind of book I can literally inhale!

Hush by Karen Robards was released via Hachette Australia in December 2014.