I try hard not to write reviews with spoilers. Or ones that give away too much of the plot. Of course it also means I sometimes re-read a review of a book before starting the next book of the series and – unless it’s ingrained into my mind for some reason – I rarely remember the detail.

So, given two years has passed since Val McDermid’s last Tony Hill / Carol Jordan novel Insidious Intent was published (and I can’t believe it’s that long!), I’d completely forgotten Tony had gone to jail. I can’t remember any of the specifics, but that’s kind-of a good thing as newcomers to the series won’t be lost, suddenly introduced to characters – many of whom have been around now for 11 novels (and 24 years).


With Tony behind bars and Carol finally out of road as a cop, he's finding unexpected outlets for his talents in jail and she's joined forces with a small informal group of lawyers and forensics experts looking into suspected miscarriages of justice. But they're doing it without each other; being in the same room at visiting hour is too painful to contemplate. Meanwhile, construction is suddenly halted on the redevelopment of an orphanage after dozens of skeletons are found buried in the grounds. Forensic examination reveals they date from between twenty and forty years ago, when the nuns were running their repressive regime. But then a different set of skeletons are discovered in a far corner, young men from as recent as ten years ago.

When newly promoted DI Paula McIntyre discovers that one of the male skeletons is that of a killer who is supposedly alive and behind bars--and the subject of one of Carol's miscarriage investigations--it brings Tony and Carol irresistibly into each other's orbit once again.

I usually whine when authors include several plots in one book but here I really didn’t mind. In some ways we get three (or more) for the price of one.

Carol’s put-upon by Tony’s narcissistic and nasty mother to pursue someone who took her in via a Ponzi scheme. It’s only a small part of the plot but is a reminder of Tony’s history / baggage and the origin of some of his idiosyncrasies. Carol’s also approached by a defence attorney to do some investigations for an informal group (After Proven Guilty) established to re-examine miscarriages of justice – akin to Innocence Project. She’s reticent at first, but ultimately tempted by the case.

Then there are the bodies at the old convent. Some have been there for decades and we learn that the nuns at the former school were rather secular when it came to disciplining girls placed in their care… particularly those who had nowhere else to go. It’s the more recent bodies that come under the purview of the ReMIT (regional major incident) team – once headed by Carol before her latest fall from grace. McDermid introduces some of the players involved in that case before the bodies are found, which meant their presence later made more sense.

And then of course there’s Tony. In jail and working on his book. Each chapter of this novel begins with an excerpt from Tony’s fictitious book on criminals / crimes  and I have to admit – though I don’t read non-fiction I was actually quite drawn to each of the snippets McDermid includes. Tony’s also keeping himself busy by offering some advice and thoughts via a segment on the prison radio station. He knows he’s got an unusual gift for empathy but struggles with social skills and he misses Carol’s ability to act as interlocutor . Of course, Tony being Tony, ends up pushing things a little too far in his attempt to do good. 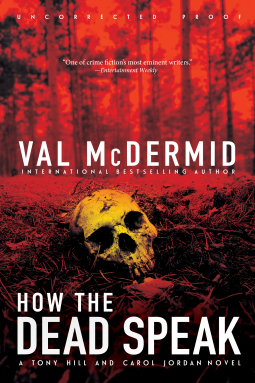 So – there’s lots happening here, which could be bad. But it isn’t. It’s a pretty long book but McDermid effortlessly switches between cases and narrators. I didn’t really prefer any of the narrators or cases to others, so wasn’t impatient if Tony or Carol featured less in chapters than the ReMIT team. We’re sent off with several members of team which included a couple of new faces as well as those we’ve met before (like McIntyre).

And I liked that the new boss – though perhaps not as savvy as Carol – didn’t seem to be a complete prick, so McDermid resisted the temptation of going down the “bastard guv’nor” route.

I’m really enjoying the fact McDermid has found new adventures for Carol and Tony (the whole being-in-jail thing aside). The last few books and several years have seen some big changes for the characters and their story arc hasn’t stalled or become stale. Indeed, McDermid leveraging off some great new characters for the more traditional police procedural elements and giving Carol and Tony different challenges.

Obviously McDermid has Carol and Tony’s voices down ‘pat’ and here I appreciated that they weren’t able to defer to each other as they usually do. We’re in both their heads (as well as those of our other narrators) but they’re comfortable places to be and I liked the level of introspection McDermid gives them (and our other hosts). As mentioned, I also (surprisingly) enjoyed the paragraphs preceding each of the chapters (ostensibly) parts of the Reading Crimes book Tony’s writing in prison. They’re probably more McDermid than Tony Hill, but interesting that she’s written them in a more conversational and accessible tone.

How The Dead Speak by Val McDermid was published in Australia by Hachette and now available.