Police Firearms Officer Aden McCarthy has been rejoined by partner Rhys who’s back from suspension after an incident involving a civilian shooting that left teenager Dylan Lowe in a coma unlikely to ever wake. It’s an incident which has been plaguing Aden who believes his inaction caused his colleagues to be at risk and resulted in their suspension.

Aden and his colleagues are all patients of hospital psychologist Imogen, who’s also working with the angry Steve Lowe, Dylan’s father. Imogen’s engaged to long-term partner Dave and has a lot on her mind following the hospitalisation of her niece and daughter of twin Mara.

We also meet Charlotte Solomon (Charlie), a tenacious reporter on the local paper. 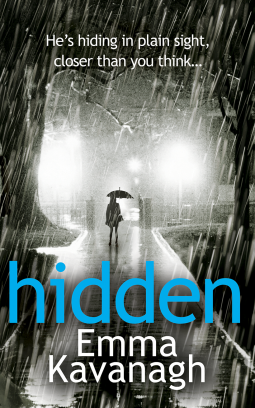 Hidden opens with a spree shooting at the hospital and Kavanagh then takes us back to the days leading up to the incident.

A nurse spots an armed man in the hospital and calls in the police. When the nurse is killed in a hit and run Charlie can’t help but feel everything’s linked—particularly when it’s revealed the intruder was approaching Dylan’s ward when spotted.

The opening scene in this book was one of the most gripping I’ve read. I didn’t know who anyone was, but I didn’t care. I was hooked.

The bodies litter the hospital lobby like autumn leaves blown inside on a gusty day. There are so many of them, the floor has vanished beneath them.

The plot itself is solid and Kavanagh introduces a raft of possible scenarios. Parallel story-lines focussing on family, relationships and trust offered additional texture as readers are forced to consider the connections.

We’re mostly in the heads of the likeable Charlie, Aden and Imogen… as well as the shooter in the days leading up to the hospital shooting. Kavanagh does a good job of not revealing too much so the plot unfolds at a steady pace.

I wasn’t a huge fan of Kavanagh’s first book, Falling (giving it only 2.5 stars in Goodreads) but enjoyed this one far more.

Hidden by Emma Kavanagh was published by Random House UK (Cornerstone) on 23 April 2015 and in Australia on 1 May 2015.