I loved the first book in this series, Orphan X by Gregg Hurwitz. It was one of my favourite books of 2016. I enjoyed the second but it felt a little different. Orphan X  (aka Evan Smoak / The Nowhere Man) seemed as if he’d taken a detour from where we’d started and the novel was more an action-focused game of cat and mouse than its predecessor.

Hurwitz retains the action from both the first and second books in this third outing, Hellbent, but returns to where he started and builds on the humanity of the former assassin and – I ADORED this book.


Taken from a group home at age twelve, Evan Smoak was raised and trained as an off-the-books government assassin: Orphan X. After he broke with the Orphan Program, Evan disappeared and reinvented himself as the Nowhere Man, a man spoken about only in whispers and dedicated to helping the truly desperate.

But this time, the voice on the other end is Jack Johns, the man who raised and trained him, the only father Evan has ever known. Secret government forces are busy trying to scrub the remaining assets and traces of the Orphan Program and they have finally tracked down Jack. With little time remaining, Jack gives Evan his last assignment: find and protect his last protégé and recruit for the program.

But Evan isn’t the only one after this last Orphan—the new head of the Orphan Program, Van Sciver, is mustering all the assets at his disposal to take out both Evan (Orphan X) and the target he is trying to protect.

This book opens with what we assume will be a circular ending. You know… when we start midway through a scene and then go back in time to learn how we got there. Although we don’t need to wait until the end to get back to the opening scene… just a little way through. Which felt kinda different. Not good or bad, just more television-like than bookish for some reason.

I remembered the first book in the series focused on Evan being hunted by former colleagues, determined to take revenge on him for having left the black ops program AND well, just wanting to wipe him out cos he’d turned on them and they wanted to erase any evidence of his existence.

We rejoin Evan as the fiendish Charles Van Sciver, director of the Orphan program, refocuses his efforts to track him down. Van Sciver’s out for revenge (after the events in the first book of the series) but his hatred is personal as he continues to view Evan as a rival and can’t forget being bettered by him when young.

However, we soon learn that Van Sciver is merely a puppet and is working for someone else. He knows Evan well however and decides to track him down via his former trainer and father figure Jack Johns. Jack seems to know the end is nigh, so contacts Evan who later realised his old mentor had another agenda for making contact, leaving him an unexpected message. 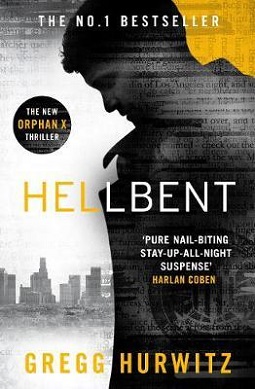 And suddenly Evan’s not alone and finding himself relating more to Jack than he ever expected. It’s probably a bit of a spoiler but we learn there are not only abdicating Orphans, but (Orphan program) dropouts as well, which is how Evan comes across Joey.

And what a ray of humanity-inducing sunshine Joey is. In the first book Evan’s grappling with the fact he’s not completely devoid of feelings; and there’s a sense he’s pining for a normal life. I missed his neighbours, Mia and her son Peter in the second novel, but they’re back here and they’re a reminder of what he’s missing.

Jack had always taught Evan that the hard part wasn’t being a killer. The hard part was staying human. He was superb at the former. And growing proficient at the latter.

Of course at the same time he realises the battle with Van Sciver will not end the war and he’s conscious that he’s stuck in life he can’t escape. It’s advice he tries to share with Joey, as well as another potential ‘Orphan’ and a young man he helps in his ‘Nowhere Man’ (helping the helpless) role.

As usual Hurwitz nails the fight scenes and those about weaponry and martial arts were all very technical. I must admit I struggled to visualise what was happening in the final ‘big’ fight sequence and couldn’t quite work out who was where and so forth. However – as I’ve mentioned before – I know Hurwitz goes to A LOT of trouble to ensure his characters and their actions are authentic. I follow him on social media and know it seems to be something he’s passionate about. Let’s just say in terms of discipline and drive Hurwitz seems to be more Evan than (early) Joey.

Of course however, in this outing, we get to travel on an entire ‘journey’ with Joey as well and – though it seems unlikely – I’d love to meet the (smart and tech-savvy) Orphan drop-out again.

I really enjoyed this book and loved Evan’s growth as well as glimpses of his fallibility. And I absolutely adored Joey. It only kills me that I’m gonna have to wait about a year for the next instalment.

Hellbent by Gregg Hurwitz will be published in the US by Minotaur Books (Macmillan) and in Australia via Penguin Books in late January 2018.