I’ve just finished reading a book by someone I think of as a ‘virtual blogging buddy’. I don’t actually know what took me so long to order the damn book, as I’ve been a fan of Karen CL Anderson’s blog for some time now.

Naturally, being an all-or-nothing type… which Karen also confesses to being (though less so now I expect) I read the book over a weekend – rare for me with non-fiction (though I literally inhale fiction in a sitting!) 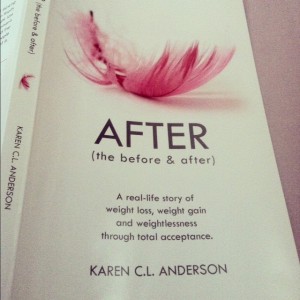 Karen’s book, AFTER (the before & after) isn’t a ‘self-help’ book and it isn’t a ‘how-to’ book. Rather it documents her adventures (am trying not to use the word ‘journey’ – oft used by contestants in reality TV shows) from self-loathing to self-acceptance. By acting from a place of acceptance rather than fear, Karen says, she has seen improvements in all aspects of her life.

In my diet blog I’ve written about a concept from her book which jumped out at me – the notion of not being ‘broken’ and ‘needing to be fixed’ – something I’m grappling with at the moment in my quest to become the person I WANT to be, rather than the person I am.

But another aspect I’ve been mulling over was something she prepared readers for in the introduction, and again touched on at the end, “… the journey never ends,” she says, ‘after’ is just an illusion.’

The book ends with Karen having insight into the fact that – for her anyway, dieting and restricting food did not work in the long term and resulted in stress and fear. Instead, she said, she realised that she needed to trust and accept herself rather than focus on having to get to some predetermined goal weight. There will be, she said, no ‘before and after’ photos in this book. There will be no ‘happily ever after’. That was not what the book (or Karen) is about.

I’ve been thinking about this because in my diet blog I’ve been talking about the concept of ‘not-dieting’. Another book I recently read (yes, TWO non-fiction books in one year – to complement my 2-3 fiction novels/week – no wonder I am becoming such an evolved person!) proposes ‘intuitive eating’ rather than dieting (ie. listening to the body’s signals when it’s hungry, full etc) and notes that many people who’ve ‘dieted’ regain the weight they’ve lost (and sometimes more) when they ‘finish’ dieting.

What if Karen HAD finished the book with ‘I’ve reached my goal weight. The end. Ta-da!’  We’ve seen it before. Other weight-loss success stories – only to later read sad confessions of woe in women’s magazines by the same authors or celebrities who’ve regained weight and feel like they’ve failed their readers and fans.

We like the ‘And they lived happily ever after’ storyline endings. But do we ever think about what comes next? After ‘The End’. 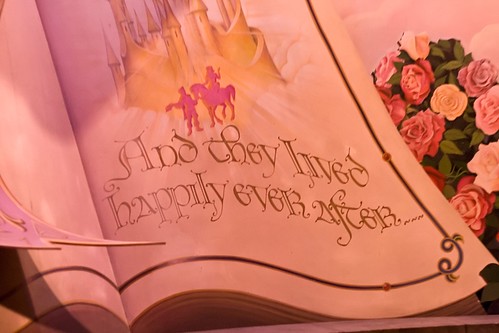 In my own daydreaming world of meeting some fabulous man, my fantasies only go up to the falling-in-love / getting-married or shacking-up point. They never stretch to the day-to-day humdrum of paying bills, taking out the garbage and putting down the toilet seat, which come after the ‘Happily Ever After’.

I certainly favour a happy ending and I suspect most of us (non-sociopaths) are the same. Although when I discussed this with a (male) work colleague, he suggested it was just a female thing. Hmmm…. I wonder.

Should I be blaming the Mills and Boon novels I read at my grandmother’s house on holidays as a youngster? Or the Sweet Dreams novels offered for sale through my school bookclub when I was a teen?

Or does it go further back? Can we blame the Brothers Grimm or Hans Christian Anderson for example? Is it because we were never encouraged to wonder what happened AFTER Prince Charming slipped that glass slipper on Cinderella. I mean, perhaps he embezzled State money and they became destitute and Cinders had to go back to scrubbing chimneys and the like. Or perhaps her Prince Charming was in fact also Snow White’s and he was a bigamist! Did you ever think of that?

So, have we been duped? Have we been promised a fairytale, only to experience confronting and complex reality when we awake each dawning day? Certainly I don’t feel that I have my ‘happily ever after’. Most of the time life is just bloody hard work.

Unhappy endings or cliffhangers are more ‘edgy’ now and so more common than in the days of Gone With The Wind. In fact sometimes it’s seen as a good thing if we leave the cinema pondering on a film’s outcome for days to come. But are these not-happy endings as satisfying as the alternative?

Why is it we need these happy endings I wonder? Does the ‘happily ever after’ leave us with a sense of closure; a glimmer of hope; or perhaps it offers us faith… that all will be well in the world?

I’m not sure I must confess. I didn’t actually think this with Karen’s story, but when it comes to ‘fiction’ I’m most definitely a fan of the ‘happily ever after’, which is strange because in real life I’m a complete cynic – although I wish I wasn’t. In fact, I wish I believed in fairytales.

What about you? Do you need a happy ending? Are you a fan of the fairytale?