It may not surprise you to know that there appears to be no end to my ignorance. Though a self-professed lover of crime fiction (mysteries, thrillers, suspense novels, police procedurals etc) I continue to stumble across local authors with established repertoires and international reputations.

I blame my pre-2014 antipathy towards Aussie books for this and am trying to look on the bright side…. I have a wealth of already-published reading fodder on which to feast! When I get time.

Adrian McKinty is actually Irish-born and bred and moved to Australia in 2008 after living in the US for over a decade, but… for all intents and purposes is an Aussie author. 🙂

His popular Sean Duffy series is set in McKinty’s old stomping ground (Carrickfergus in Northern Ireland) and Gun Street Girl—the fourth in the series— is shortlisted for a 2015 Ned Kelly Award!

Belfast, 1985, amidst the “Troubles”: Detective Sean Duffy, a Catholic cop in the Protestant RUC (Royal Ulster Constabulary), struggles with burn-out as he investigates a brutal double murder and suicide. Did Michael Kelly really shoot his parents at point blank and then jump off a nearby cliff? A suicide note points to this conclusion, but Duffy suspects even more sinister circumstances. He soon discovers that Kelly was present at a decadent Oxford party where a cabinet minister’s daughter died of a heroin overdose. This may or may not have something to do with Kelly’s subsequent death.

New evidence leads elsewhere: gun runners, arms dealers, the British government, and a rogue American agent with a fake identity. Duffy thinks he’s getting somewhere when agents from MI5 show up at his doorstep and try to recruit him, thus taking him off the investigation.

Duffy is in it up to his neck, doggedly pursuing a case that may finally prove his undoing. 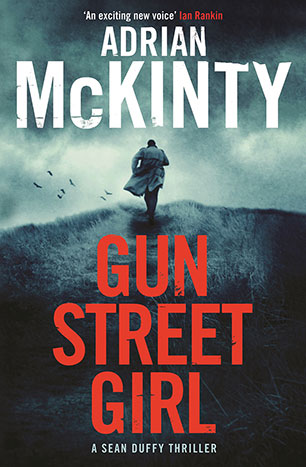 Sean Duffy is not your typical heroic protagonist. He has a penchant for cigarettes, dope, alcohol of all varieties and good quality cocaine. He is however likeable and surprisingly honourable in an occasionally-unhinged ‘take no prisoners’ way.

A few of my favourite series have been set in the past (Sue Grafton’s Alphabet Series and Robert B Parker’s Spenser series come to mind) and it’s a reminder of what life was like before we had the technology we rely (so heavily) on today.

Plus… we were far less politically correct. Duffy and his fellow coppers, or peelers (a term I’d never heard before) often get shit-faced on duty (before lunch) and before hopping behind the wheel of the Land Rover to question some baddies.

Featuring heavily in this novel (and I assume the series) is the soundtrack of the 1980s. McKinty must surely have a love of music as Duffy’s mood shapes his listening pleasure and includes everything from The Cure to Bruce Springsteen to Buzzcocks to Michael Nyman. I’m sure if the series was ever translated onto the small (or big) screen there’d have to be an accompanying soundtrack release!

I found myself easily warming to McKinty understated style of writing. In fact I realised part-way through that I loved Duffy for the same reason I love Robert B Parker’s Spenser…. he’s a smart-arse. And a well-written one at that.

The novel also reminded me how little I knew about Ireland and its history. I grew up in the era of the IRA and Sinn Fein and tend to forget that protestants vs catholicism was once even a thing.

There’s something bittersweet in realising that the Ireland of today is very different; but that other countries (Korea and many in the Middle East) continue to be beleaguered by conflict based around religious and cultural ideologies. (Speaking simply of course!)

I’m excited to have discovered this series and given that this book’s predecessor, In The Morning I’ll Be Gone won Best Fiction at last year’s Ned Kelly Awards, I can be assured they’re consistently enjoyable.

For your added pleasure I thought I’d link to this clip of McKinty demonstrating how to make Sean Duffy’s Vodka Gimlet. (Plus I love me an Irish accent!)

Gun Street Girl by Adrian McKinty was released in Australia via Allen & Unwin in February 2015.