Not long ago it seemed everything I read centred around mental illness. Sometimes it’s missing children or childhood trauma impacting lives many years later. Lately it’s death and its aftermath.

Marion Halligan’s latest novel, Goodbye Sweetheart,  introduces us to William. Like a crime show on TV kicking off with the death of the victim, William is present but briefly although remains the central character as those left behind come to terms with his sudden death.

A reviewer in Goodreads (giving it 4 stars) described this novel as ‘a set of character studies joined together in a novel’. And that’s kinda true. After meeting William we’re introduced (one by one) to those who knew and loved him. Their stories are shared separately, but like some vignette-inspired Woody Allen movie, their lives all intersect—through William and his death.

We meet William’s three wives and three children (one from each marriage), his brother and (unexpectedly) William’s lover. Halligan offers us the viewpoint of each of the main characters, although we seem to spend much of the time in the heads of Lynette—William’s current wife and Ferdie—a PhD student in the UK—William’s second child (and only son).

In reality William seems pretty unlikable. A partially-interested father, serial adulterer and man focussed more on the material and his career than family and friends. Of course he’s suddenly gone and it’s family (not clients and colleagues) who mourn his passing. 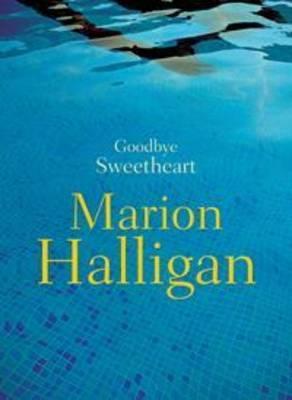 I’m a reader who appreciates plot-driven novels. Goodbye Sweetheart  is most definitely not that. It is, however, an interesting study of grief and mourning; and of family and relationships. Its characters are central, though I found myself puzzled at times by the attention Halligan proffered to some.

I LOVED William’s aunt (Ferdie’s great aunt) Pepita, for example and appreciated the time we spent with her; but then wasn’t sure why we were privy to discussions between Lynette’s business partner and her husband about their own children which seemed very left-field. “Do I really need to know this?” I found myself asking. “Should I retain this information or can I just skim it?”

I would have thought I’d know William well after seeing him from so many different facets and through so many different lenses, but it wasn’t really the case. I felt I knew far more about his wives and Ferdie in particular, than the man at the centre of everyone’s attention. I can only imagine Halligan intended that William remain somewhat of an enigma.

I would have liked to have seen William through the eyes of his daughters (particularly his youngest, Erin) as my only understanding of William as a father came from Ferdie, and he didn’t paint a particularly pretty picture.

… a funeral is no help with grief, though as the words shape themselves he wonders what is a help with grief and furthermore what is the grief he feels? For the father dying now? Or the father whom he had loved and who had loved him, they both knew that, but not in any way that was a comfort or a balm or a delight but rather was an awareness, a desolation even, of what might have been, ought to have been, that people more clever, more diligent than they might have created.

The writing however is beautiful. I’m such a literary heathen I hadn’t heard of Halligan before but am interested in seeking out more of her work. One of my favourite writers (perhaps as opposed to authors) is Anita Brookner. Not a lot happens in some of her books. The CliffsNotes would be brief, but I find myself enchanted by the beauty and rhythm of her language. Halligan’s writing very much reminds me of Brookner’s.

Goodbye Sweetheart by Marion Halligan will be published by Allen & Unwin in late March / early April 2015.

* As a complete aside I should mention that this novel eschews inverted commas for the purposes of dialogue. I’m a bit of a minimalist at heart (though you wouldn’t know that from my prolific use of the semicolon and dash!) so I didn’t mind; but it does take some getting used to.