I read To Kill A Mockingbird because I had to. It was part of our high school syllabus and (interestingly) one of the few books we had to read that I actually read. I’ve read it since, but not recently. And while it remains a beautifully-written portrayal of a terrible time in history and a reminder of my teenage years, I was in no hurry to read Harper Lee’s much-awaited sequel.

My biggest fear was that Go Set a Watchman would be irrelevant. Readers of the 21st century are pretty inured to the race and gender issues which characterised our first outing with Scout, Jem, Atticus and Tom Robinson.

And I pondered on the pressure Lee must be under. So many authors with great debut novels have fallen prey to the second-book syndrome. Often it’s not even about the book itself or the writing, but rather readers’ expectations. And after five decades the pressure must have well and truly built for the author of one of the world’s most beloved novels.

Nevertheless, like gazillions of others I read the first chapter of  Go Set A Watchman in the days before the book’s release. And I was disappointed.

We were very casually informed, for example, that a main character had died and Scout… well, Scout just didn’t seem like Scout. I prepared myself for the worst.

And was pleasantly surprised.

In fact, after picking up my pre-ordered copy today I planned to spend a moment glancing over the first few chapters before reading it later this week. However chapters two and three were fabulous and suddenly I was hooked. 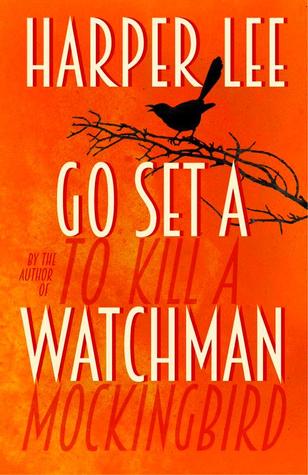 In case you’ve been living under a rock, Go Set A Watchman takes place 20 years after its predecessor (in the 1950s, at the time the book was written). Twenty-six year old Scout—now known by her real name, Jean Louise—is making her annual pilgrimage home from New York to Maycomb, Alabama for a short holiday. Atticus is still practising the law at 72 although he has an offsider in the amicable Henry, who has his heart set on marrying Jean Louise.

Jean Louise is prepared to spend her precious holiday doing battle with the aunt who takes care of her father and warding off Henry’s marriage proposals; but she’s not prepared for what she discovers about her own family, particularly the father she’s idolised for so long.

She did not stand alone, but what stood behind her, the most potent moral force in her life, was the love of her father. She never questioned it, never thought about it, never even realised that before she made any decision of importance the reflex, “What would Atticus do?” passed through her unconscious… p. 117

Jean Louise has built her life on the values she adopted in childhood and can’t believe her memories don’t reflect reality.

What was this blight that had come down over the people she loved? Did she see it in stark relief because she had been away from it? Had it percolated gradually through the years until now? Had it always been under her nose for her to see if she had only looked? p. 150

There is no doubt Harper Lee can spin a great yarn. As was the case in TKAM we’re taken off on all sorts of tangents as she shares snippets of local history and events. My favourite parts of the novel however are the conversations Jean Louise has with those around her. Scout’s belligerent and blunt voice continues to shine through.

Lee can be a little long-winded at times but certainly has a way with words (my personal fave!):

and can certainly turn a phrase…

That her son had developed all the latent characteristics of a three-dollar bill escaped her notice…. p. 28

The novel’s told from Jean Louise’s point-of-view in third person but every so often switches to first and second, which is a little bewildering. I had to stop and check she wasn’t actually saying those things… rather they were akin to a voice-over. Like serial-killer Dexter confessing his darkest secrets or Bridget Jones sharing the results of her daily weigh-in. #Sortof

There’s a lot happening in this novel and much of the minutiae went over my head, including elements about the confederacy, supreme court actions, the US constitution and 10th amendment. I also had to google NAACP. And quite frankly I know (and care) very little about the differences between the beliefs of catholics vs baptists vs methodists. Unfortunately some of the arguments about religion and the role of government are (sadly) very deja-vuish.

But there are many lessons on offer. Pages 235 – 256 are freakin’ phenomenal. And scary at the same time. There are some amazing lines in those pages and I shared some on twitter and elsewhere with the hashtag, #faaarck.

I mean, I grew up right here in your house, and I never knew what was in your mind. I only heard what you said. p. 247

I read a post by a US book blogger on the weekend discussing suggestions Atticus was racist in TKAM. I didn’t think so. Paternalistic perhaps. But Go Set A Watchman clarifies his position.

Lovers of TKAM should be prepared for the fact that Go Set a Watchman includes ‘some’ characters from its predecessor. Not ALL and not even some of your favourites. We do however have some great new characters that I can’t recall from TKAM including her Uncle Jack, a retired (and somewhat eccentric) doctor.

I’m giving this novel 4.5 stars, though I know potential readers really won’t be swayed by my opinion when it comes to the legacy of Scout and Atticus. The pacing was a bit off and plot a bit meandering at times. I was perhaps also a little frustrated by the ending, but it’s a thought-provoking, surprisingly addictive and entertaining read.

For thus hath the Lord said unto me,
Go set a watchman, let him declare what he seeth. (Isaiah v6)

Will you be reading Go Set A Watchman?

PS. As an aside, if you don’t know…. GSAW was written before TKAM, but publishers so liked the reminiscences of young Scout so much they requested a novel written from her point of view. That novel became TKAM and GSAW was shelved.