This will sound weird (and I know that’s never stopped me before) but there was something about: the title of this book, its cover and name of the author which made me think I was about to embark on Nordic Noir. And I was a little worried as not all books I’ve read which have been popular in their country of origin have translated as I’d hoped. (And I guess the same can be said when a great TV show is remade in English and into something a little more mainstream.)

However… all of those weird prejudices aside, this book was very very different to whatever it was I’d imagined and was – most certainly – an excellent read.


When beloved high school student Lucinda Hayes is found murdered, no one in her sleepy Colorado suburb is untouched – not the boy who loved her too much; not the girl who wanted her perfect life; not the police officer assigned to investigate. In the aftermath of the tragedy, these three indelible characters – Cameron, Jade, and Russ – must each confront their darkest secrets in an effort to find solace, the truth, or both.

While I’m confessing to my weird assumptions I should say that I tend to not expect amazing prose when I’m reading crime fiction / thrillers / mysteries. I know that makes me sound like some weird genre snob but most of my reviews involving crime fiction rarely include quotes. In fact, I tend not to notice the writing, which is a good thing as I focus more on the plot and characters. There are some authors who have a great way with words (Candice Fox and Adrian McKinty come to mind) but it’s not necessarily something I expect.

Kukafka’s beautiful writing however, had me highlighting phrase after phrase. Sentence after sentence. At the same time I realised I wouldn’t be able to use most in my review as they’re too ‘telling’. They give too much away about our characters and the plot.

If this moment were a song, Cameron thought, it would be a quiet song – the sort of song that drowned you in your miserable chest. It was stunning and tender. It dropped, it shattered, and Cameron could only feel the weight of this melody, this song that felt both crushing and delicate. p 10

The book opens just after Lucinda’s body is found. We’re in the heads of three characters: teenagers Cameron and Jade and police officer Russell Fletcher. And we pop in and out of their interconnected stories throughout the novel.

Cameron’s known to all as ‘the stalker’ – seemingly fascinated with Lucinda. He talks about being ‘tangled’ and has learned to deal with blackouts and feelings of bewilderment and anger by fleeing to a place in his mind he calls Hum.

Jade is the disenfranchised daughter of a present-but-absent father and heavy-drinking and occasionally-abusive mother. She and her sister once hung out with Lucinda and her younger sister but that was a long time ago. Jade resents Lucinda now. To me it didn’t feel like envy. Just resentment for the things Jade thinks Lucinda has taken from her. 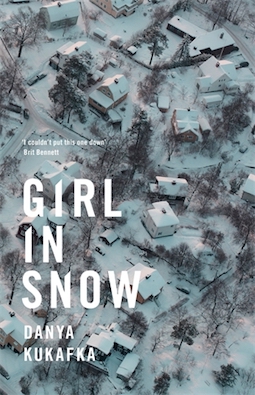 And then there’s Russ who seemingly became a cop by default. He was close to his former partner, but it ended badly and Russ is still reeling from the betrayal many years later. He’s married to a woman who seemingly doesn’t love him and they rarely communicate. Russ is unhappy and seems put-upon but he’s a man of his word and he’s made promises… some of which impact on his role in investigating Lucinda’s death.

In reality this book felt (to me) mostly to be about Cameron and Jade. Both are outcasts and highly creative. Cameron is an artist and draws Lucinda repeatedly.

I don’t understand how you draw from memory, Mom had said once, as Cameron spread his art supplies across the living room floor. How do you hold onto all of the details?

Cameron had shrugged and said, I guess I can’t figure out how to lose them. p 233

Jade writes screenplays and parts of the unfolding plot are reflected in her creations. It’s through them we learn what she’d like her family and friends to say and do. Reality is quite different.

It’s all about perception. What I see is automatically my truth, simply because I’ve seen it. I’ve interpreted it that way. (A character from Jade’s screenplay. p 168)

Kukafka does a great job of keeping us guessing. We’re privy to a information about our characters and things they know about others. At times the circumstances surrounding Lucinda’s murder seem obvious. Other times less so.

And mostly we want to be wrong about what we suspect because Kukafka ensures we come to care about the people we meet.

This book is about love, loss and grief. It’s about vulnerability. It’s about the disenfranchised and the fact many of us feel unable to be who we really are. And it’s about the bravery of those who do so.

Cameron wanted to tell Mr O about loss – the hissing sound it made, like air drained from a tire, how that sound could continue forever if you let it – but maybe Mr O already knew. p 91

This book came as a huge surprise to me. The plot is complex and intriguing. The characters are impossible not to love and sometimes painfully exposed. And the writing is beautiful. It’s Kukafka’s first novel and I can’t wait for more from this talented writer and storyteller.

Girl in Snow by Danya Kukafka by Simon & Schuster (US), Picador and Pan Macmillan in Australia and is now available.