In my review of the Nicci French novel, Thursday’s Children I was fairly blunt in relation to my antipathy toward psychologist, Dr Frieda Klein. Prickly and unlikeable I struggled to care a lot about her (and her welfare). I still enjoyed the book—predominantly because the Gerrard / French combo can still spin an absorbing tale. Despite Frieda.

Unfortunately I’m assuming Frieda’s going to stay in play right through the week, so we have a Saturday and Sunday to get through yet. <Insert sigh here.> However… on a happier note, I actually found her less grating this time around and almost… almost  found myself on her side. 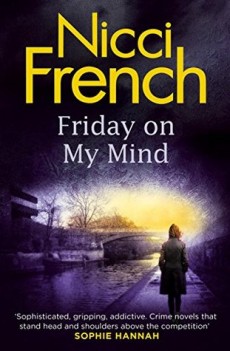 When a man’s body is pulled from the river with a medical band bearing her name, Frieda’s called in to identify the body. It’s Sandy—her former boyfriend, with whom she split eighteen months earlier.

Police Detective Chief Inspector Sarah Hussein and offsider DC Glen Bryant are assigned the case and quickly become suspicious of Frieda and her offhand manner.  This is exacerbated when the Commissioner calls Hussein into his office to air his many grievances against Frieda and her checkered history with the police. They soon discover that Sandy’s been practically stalking Frieda and was seen yelling at her just days before his death.

So when Sandy’s wallet is found in Frieda’s apartment she becomes the number one suspect and is about to be arrested when she surprises everyone by going on the run.

While evading police and trying not to get her friends in trouble (#spoileralert – she doesn’t succeed) she attempts to uncover Sandy’s murderer herself.

As usual Gerrard & French offer up a decent whodunnit, with a stack of suspense added for good measure. I was pretty much kept guessing until the end… but continued to grapple a little with the (lack of) depth of the characters on offer.

I did however, feel a bit more engaged with Frieda this time around, and related to her more than in previous works in the series. I’m not sure how to explain it other than saying she seemed more human (particularly around the children in this novel). She’s still her own worst enemy—she never comes across as infallible; just strange and inaccessible.

But again there’s so much that just doesn’t fit although I’m sure the authors mean for Frieda’s character to be a dichotomy between sociopath and therapist. On one hand she won’t tell anyone where she is hiding, but on the other she presents herself at a friend’s offering to provide daycare to their child. Like I said, I’m sure it’s done on purpose but frustrates me nonetheless.

Friday on my Mind by Nicci French, published by Penguin Australia was released on 24 June 2015.

Yet another unlikeable character. Perhaps it’s me?
Nevertheless, I much prefer earlier work by the Nicci French pairing!