Sandra Brown’s a successful historical and romance author who (sometime in the 199os) side stepped deftly into the romantic suspense genre. She mostly gets a good balance between the two and doesn’t include too much vomit inducing or cliched sex scenes.

Her latest, Friction, is no different.

Crawford Hunt wants his daughter back. Following the death of his wife four years ago, Crawford, a Texas Ranger, fell into a downward spiral that left him relegated to deskwork and with his five-year-old daughter Georgia in the custody of her grandparents. But Crawford has cleaned up his act, met all the court imposed requirements, and now the fate of his family lies with Judge Holly Spencer.

Holly, ambitious and confident, temporarily occupies the bench of her recently deceased mentor. With an election upcoming, she must prove herself worthy of making her judgeship permanent. Every decision is high-stakes. Despite Crawford’s obvious love for his child and his commitment to being an ideal parent, Holly is wary of his checkered past. Her opinion of him is radically changed when a masked gunman barges into the courtroom during the custody hearing. Crawford reacts instinctually, saving Holly from a bullet.

But his heroism soon takes on the taint of recklessness. The cloud over him grows even darker after he uncovers a horrifying truth about the courtroom gunman and realizes that the unknown person behind the shooting remains at large…  and a threat.

Catching the real culprit becomes a personal fight for Crawford. But pursuing the killer in his customary diehard fashion will jeopardize his chances of gaining custody of his daughter, and further compromise Judge Holly Spencer, who needs protection not only from an assassin, but from Crawford himself and the forbidden attraction between them. 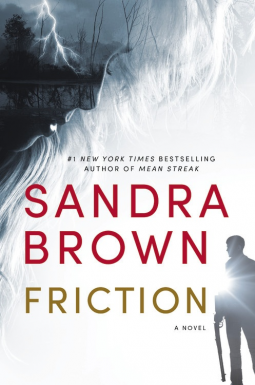 I actually had no idea there was such a thing as a Texas Ranger and the US policing system continues to confound me as much as the French policing and judicial system. But that’s kinda irrelevant.

Brown again delivers a fast-paced thriller and offers readers likeable (even loveable) characters in Crawford and Holly. Their backstories are shared seamlessly so we’re able to get to know them quickly. There’s a lot happening in their lives and the shooting simply adds to that pile. It means however, they’re complex characters and—really—the strength of this novel.

The plot’s good but perhaps (ultimately) a bit of a stretch when we finally know the motivation behind the shooting, but it also means we’re kept guessing for much of the novel.

I did groan a little (and not in a good way) at one of the sex scenes, but that’s mainly cos I struggle with the language authors feel compelled to use. After a heap of flowery romantic ‘spiralling, appeasing, bursting, thrusting and encompassing’ Crawford says….

Where’d you learn to fuck like that? Law school? pg 272

I know it’s just me… and I would have barfed if he’d used ‘make love’ instead of ‘fuck’, but still…

Thankfully (as I said earlier) this novel falls more strongly on the suspense side of the romantic suspense equation and I very much enjoyed it, reading it in just two sittings.

Friction by Sandra Brown was released on 18 August by Grand Central Publishing (Hachette Book Group) and 8 September via Hachette Australia.

I received an electronic copy of the book from the publisher for review purposes.

Anyone else struggle with sex scenes? In books, I mean!!!