I’ve had a few unfortunate experiences with books translated from other languages – particularly those written by Scandinavian crime writers. They’ve usually been more obscure authors and I know one in particular was on his third book in the series and using his third different translator. The words themselves can make or break a book and understandably someone who writes beautifully in one language may not translate as well into others.

As a result I have to admit I tend to shy away from translations unless others I know have been gushing about a book’s magnificence. 😉

Five  by Ursula Archer (an Austrian author) had its fair share of colloquialisms and locale-specific nuances but didn’t suffer at all from its translation into English. I hadn’t heard of Archer (aka – Poznanski) before but note she’s written 4-5 novels and Five  – published in 2012 in Austria – appears to be her first English release.

Five  introduces us to Detective Inspector Beatrice Kaspary (also a single mum with a problematic husband) and her colleague Florin Wenninger. Beatrice and Florin are called to a murder scene where the body of a woman has been found with letters and numbers tattooed onto her feet. They soon discover them to be map (GPS) coordinates and this kicks off an intriguing game.

The novel also introduces many of us to geo-caching. I have a virtual blogging friend in Canada who’s into geo-caching but I had no idea what it was until I read this novel. In the simplest of terms it’s a bit like a treasure hunt. Of course, in Five  it’s not treasure which Beatrice and Florin find at each location, rather some gruesome body parts along with the next clue. 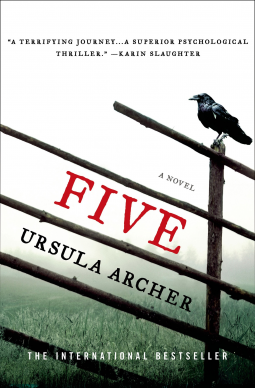 As victims pile up and suspects disappear at an alarming rate, the pair struggle to identify commonalities between their victims and attempt to get ahead of their adversary.

Beatrice also finds herself singled out by their new foe and struggles to understand why, while also dealing with her boss who doesn’t think her worthy of the job.

This novel started a little slowly which was probably a good thing as I was able to pick up the backstory and get to know our characters.

I kinda like the fact that Beatrice has a crush on Florin despite his girlfriend as it invites us to stay tuned for that ‘will they / won’t they?’ dance.

The pace of the novel quickened as we drew near the end and I found myself flipping pages as fast as possible to find out what was happening. In retrospect I thought there might have been a few clues missing, but it could be that I was reading with such desperation by the end, I glazed over bits which would have helped. Nonetheless I suspect I was holding my breath when all was revealed.

The blurb for this novel suggests it’s not for the faint-hearted. I assumed that meant it would be gruesome which isn’t the case. The killer’s a little sadistic (which is kinda expected in a fictional psychopath!) but there’s nothing too horrific. It is however, a sit-on-the-edge-of-your-seat thriller.

Five by Ursula Archer will be released via St Martin’s Press (Minotaur Books) on 9 December 2014.

I received an advance copy of this book via the Publisher and NetGalley.

NB. I later discovered it’s already out in Australia via Random House.