I went through a phase a couple of decades ago when I raced through ALL of the Stephen King books I could get my hands on. A few (Salem’s Lot for example) gave me nightmares, but I enjoyed them nonetheless. And then something happened. I don’t know what. Some appealed less. My taste changed. Who knows… and suddenly years passed without me reading any of King’s new work.

When he released Mr Mercedes in 2014 many were surprised at—what they believed to be—a change in direction. Most of the reviews I read were positive but I gather others wished King had stuck to the more macabre; or alternatively believed he was encroaching on territory that wasn’t rightfully his.

I didn’t get around to reading Mr Mercedes, but when offered a chance to read its sequel, Finders Keepers, I jumped at it. And I’m glad I did.

As I hadn’t read its predecessor I didn’t know who featured in both, but… in reality… the crossover is relatively limited and the eventual appearance of Mr Mercedes’ hero-of-the-hour, (retired detective) Bill Hodges was probably one of the elements I enjoyed least in this new novel. 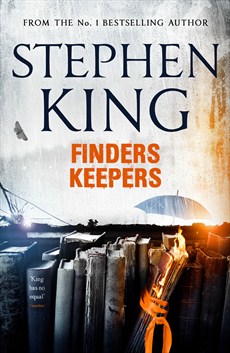 In 1978 Morris Bellamy convinces two buddies to break into the house of once-famous former novelist John Rothstein, telling them the reclusive writer kept a lot of money in his house. It was true, but Bellamy had another agenda.

When he was young he was introduced to Jimmy Gold—a character created by Rothstein. He devoured the first two novels of the series but, like many of the author’s fans, was devastated when Rothstein made major changes to the character in the third and final in the series.

While pillaging the author’s safe the intruders not only find money, but over one hundred notebooks comprising 18 years of Rothstein’s scribbles.

Frustrated by the author’s taunts Bellamy shoots him (and later his two compadres) before taking off with the cash and notebooks. He’s not planned ahead however and only has time to hide the treasure before he fucks up and is again arrested and jailed.

Thirty years later and 13 year old Peter Saubers is living in Bellamy’s old house with his younger sister and parents. The family’s recently moved in the midst of a financial crisis. His father was a victim of the perpetrator readers met in Mr Mercedes. He’s unable to work, addicted to painkillers and constantly fighting with Peter’s mother whose own job security is precarious. Peter knows things aren’t going to end well… until he very literally unearths some buried treasure.

Another four years passes before the money runs out. Peter’s relieved he found a way to save his family but inevitably takes things too far. And (of course) Bellamy eventually returns looking for his loot.

King’s created a great character in honour-student-cum-fairy-godbrother Peter Saubers. We get a good feel for the boy who wants the best for his family. He’s an amazing kid, taking on too much for someone his age. I’m pretty sure most 17 year olds wouldn’t go to such extremes just so their sister can go to her school of choice.

We also spend quite a lot of time with Morris Bellamy, the son of an esteemed academic who went off the rails when he was Peter’s age and completely astray when in juvenile detention. Thoroughly unlikeable, we get a good sense of the boy he was and the man he became.

We meet the characters from Mr Mercedes halfway through the book and I really don’t feel they added a lot to the plot. I realise Peter needed help so an intervention of sorts was probably required…  but frankly Bellamy was such a fuck-up that Peter probably could have outsmarted him anyway.

Thankfully, by the time Hodges et al are introduced things are getting interesting. I was invested enough in Peter and his plight that I couldn’t turn the pages quickly enough, needing to know if the good guy would come out on top. One normally hopes that’s the case, but with King one can’t be sure.

I suspect I’d feel more for Hodges and his Finders Keepers team if I’d read Mr Mercedes and understood what the characters went through in the first book. We do however meet its ‘baddie’ and there’s obviously more to that case and the aforementioned baddie than meets the eye.*

King’s a magnificent storyteller, no matter what genre and I’m sure this book will appeal to his usual fans as well as a heap of new ones.

Finders Keepers by Stephen King has been released in Australia via Hachette and is now available.

*Naturally Mr Mercedes has been (re)added to my ‘must read’ list.