There were a lot of them, as I mentioned in that review, but that was okay as obviously Barclay was setting the scene for future books in the series. The inclusion of a crime which wasn’t ‘quite’ solved in the first series also made way for an overarching and continuing story arc.

Far From True, is the second instalment in the Promise Falls series.


After the screen of a run-down drive-in movie theater collapses and kills four people, the daughter of one of the victims asks private investigator Cal Weaver to look into a recent break-in at her father’s house. Cal discovers a hidden basement room where it’s clear that salacious activities have taken place—as well as evidence of missing DVDs.

But his investigation soon becomes more complicated when he realizes it may not be discs the thief was actually interested in....

Meanwhile, Detective Barry Duckworth is still trying to solve two murders—one of which is three years old—he believes are connected, since each featured a similar distinctive wound.

As the lies begin to unravel, Cal is headed straight into the heart of a dark secret as his search uncovers more startling truths about Promise Falls. And when yet another murder happens, Cal and Barry are both driven to pursue their investigations, no matter where they lead.

Evil deeds long thought buried are about to haunt the residents of this town—as the sins of the past and present collide with terrifying results.

My Goodreads feed offers a bit of an indication of how I felt as I started reading this book. 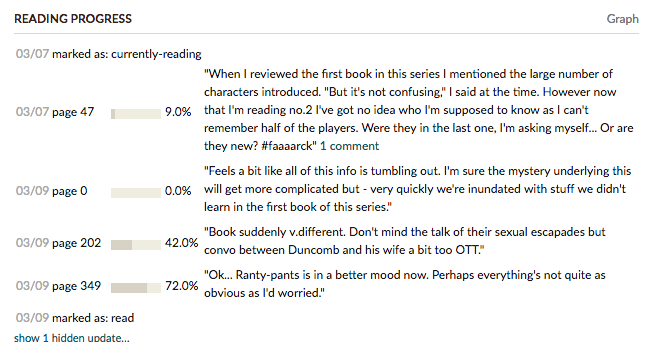 Fully expecting David, his love interest Samantha (Sam), Sheriff Duckworth and David’s dodgy boss (and mayoral hopeful) Randall Finley, to feature strongly… I was befuddled by the present of Cal – a cop-turned PI and damsel in distress Lucy.

Were they in the first novel, I wondered? Did I not remember them?

It took me some time to realise that David wasn’t going to be the main character in all of this series, but rather (akin to Karen Rose’s work – and that of others) the focus was going to switch with each novel.

So David – who I so enjoyed meeting in Broken Promise – spends most of his time dealing with the sociopathic family of Sam’s ex-husband and getting his boss Randall out of inevitable scrapes. The family secret (involving David’s dad) touched on in the first novel, is not progressed at all this time around. It could just be me, but I found it a tad frustrating to be sent down a rabbit hole and then left hanging.

The book kicks off with a bomb at the local drive-in, resulting in the death of four people, including Lucy’s father. She’s at his house just after his death when she surprises an intruder – requiring her to call on Cal’s services.

In the first novel, the attacks on young women and the murder of a young mother (and abduction of her child) were the focus… but set against a background of something more menacing. This time around the focus is on Lucy’s father, his friends and their secrets, but the Sheriff is kept busy realising – finally – that the drive-in bombing was the work of a darker presence, introduced in Broken Promise (with the distinctive reference to  the number: 23).

I eventually settled into this novel and was ultimately fascinated; but didn’t enjoy it as much as the first (which I adored). I liked Cal and Lucy (and her complicated daughter) and warmed more this time around to Sheriff Duckworth (and even Randall – as we were given a glimpse of his home life) but there was something lacking in terms of the synchronicity of the plot. Again – those damned threads not quite coming together. Yet.

I think this would be a difficult read if you haven’t read the first in the series. Although (having said that)… Barclay does offer a recap of the crimes from #1 and (in reality) much of the first novel is now irrelevant. I note this is to be a trilogy so I’m hoping the third in the series reins in the multiple threads and brings everything together without leaving too many questions. And I hope I don’t have to wait too bloody long!

Far from True by Linwood Barclay was published by Berkley (NAL) Publishing Group and in Australia by Hachette.

I received a copy of this book from the publisher/s for review purposes.