Fall by Candice Fox is the third instalment in her series featuring detectives Eden Archer and Frank Bennett. Fox’s award-winning debut, Hades, published in January 2o14, achieved a myriad of acolades here in Australia. And rightly so.

The book’s named after Eden’s ‘adopted’ former criminal-overlord father Heinrich (Hades) Archer. Much of the story however, centred around the arrival of Eden and her brother Eric into Hades’ life and what came after.

Similarly, Fox’s second novel, Eden was predominantly about Hades. Although Eden and Frank were ostensibly investigating a series of murders, Frank was also working off-the-book to track down someone from Hades’ younger years. Through these backstories we learned how the much-feared hardcore criminal…. came to be. 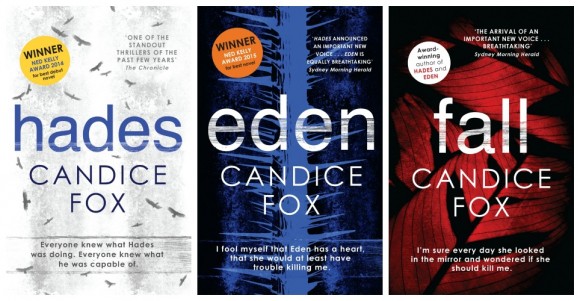 Fall picks up where Eden (the book) left off. The character (not the book) is struggling to regain her strength after being almost sliced in half in the book bearing her name. Frank’s still in the honeymoon stages of his relationship with psychologist Imogen, who we know has a secret penchant for solving crimes—but only if there’s a reward on offer. And that’s exactly what’s on her agenda now… proving that Eden (and her brother Eric) were in fact the Tanner children, missing and presumed dead for over two decades.

In the meantime Eden and Frank are investigating the murder of female joggers. And—as an aside—I always knew running was bad for you!!! #justsayin

Fox introduces us to our murderous protagonist pretty early in the novel, so it’s not really a whodunnit as such. But the story of our killer unfolds along with the kills, and Fox does a great job of steadily revealing the character and their history—allowing us to see the provenance of their rage. And importantly… allowing us to understand it.

As usual there’s a concurrent story unfolding, as Eden becomes aware that someone is looking into her history and she (in consultation with Hades) has to decide what she’s going to do about that.

The strength of Fox’s work again lies in her characters. Fall continues to offer additional insight into Eden in particular and—while I can’t remember* her being quite so heartless and / or psychopathic in the earlier books—looking back at my previous reviews… it seems she was. I have no problem with her private hobby killing baddies but she very much blurs that line this time around. I daren’t share any spoilers, but I was particularly aghast at the end. (Morality, it seems, is a funny thing!)

So… Eden remains a complex enigma of sorts. There’s something alluring about her pragmatic outlook on life and wounded-dog past and it’s tempting to wonder what lies beneath that hardened shell. Equally intriguing however, is the fact that Eden could very much embody the old saying that ‘what you see is what you get’. 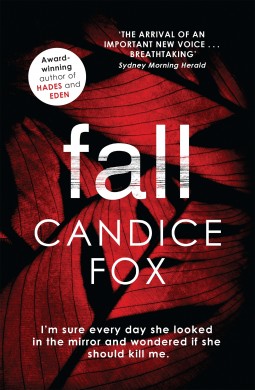 His humanity is put on show as we meet 17yr old prodigy Hooky (Amy Hooku), a young woman who survived the murder of her family and now works with the police’s cyber child pornography team in between her university studies.

I didn’t want to put this book down and it became my favourite book in this series. I was very much intrigued… probably less by the crime under investigation (the murder of the joggers) and as much by everything else happening in the novel—which I think has been the case with the earlier books. I think Fox’s crime writing repertoire is getting tighter with each episode in the series and also found myself more conscious of her writing in this novel.

Her words and phrases are easily read and absorbed, but there’s also a lot of beauty on offer. In fact, I gushed about the opening page of the prologue on Twitter. It was stunning and I had to stop and read it several times.

The Black Mutt Inn attracted bad men, and had been doing so for almost as long as anyone could remember, as though the ground beneath it had somehow hollowed a vent to hell, the men who frequented it drawn in by the familiar heat of home…..

Sometimes a plot was hatched there – the corners of the inn’s undecorated interior were very good for whispering, and the walls seemed to grow poisonous ideas like vines, spreading and creeping around minds and down necks and along legs to the rotting floorboards.

Fans of the series won’t want to miss this latest offering from Fox and I’d recommend newcomers get hold of its predecessors and spend time this summer bingeing on some great Aussie crime fiction.

Fall by Candice Fox is published in Australia by Random House and available from 1 December 2015.

I received an electronic copy of this book via NetGalley from the publisher for review purposes.

* I’ve only had this series in temporary electronic form, but must buy the series as I’d be keen to re-read them one after the other. #bingeread