I haven’t read Candice Fox’s first book Hades, but I’ve heard a lot about it. I’ve confessed before that I rarely read Australian books – particularly crime fiction. I suspect it’s combination of things but predominantly because I read to ‘escape’ and would far prefer to be taken to the dark corners of London or alleys of New York City than the salubrious streets of down-town Brisbane (for example!).

However, I’m really really glad I got the chance to read Fox’s second book Eden.

I gather I missed a lot of backstory in our introduction to police officer Eden and her father, former crime-lord Heinrich (Hades), and Eden’s fellow detective, Frank Bennett; but I didn’t suffer at all despite the loss. And – thankfully – although I know a little of what resulted in Hades, I have enough questions that I’m keen to read it as soon as I can.

But, back to Eden – the book, not the person. We rejoin Eden (the person) and partner Frank as he’s recovering from the outcome of the first novel. And… Frank’s not doing so well. He’s pretty much mainlining addictive painkillers and drinking enough to keep him pleasantly buzzed.

Eden – a very diffident and complex character – is trying to pull Frank out of his slump. Not necessarily because she cares, but because they’re about to be assigned a major case involving three murdered / missing women. Eden tosses Frank in the deep end and sends him off to do some outdoor work for her father Heinrich – who although retired – keeps busy disposing of bodies at his tip for a princely disposal sum. 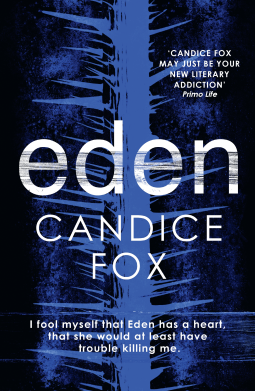 While working with Hades, Frank finds himself offered a side project and the opportunity to investigate the disappearance of someone from Hades’ very murky past.

There are essentially three parallel stories at work in Eden. Two intersect as we’re taken back in time to Heinrich’s beginnings. We learn he’s always been pretty sadistic and these skills were honed from an early age. But – I gather he often shows integrity and loyalty and we also learn how these developed. Of course this all sets the scene for Frank’s investigation into the disappearance of someone 35 years earlier.

Meanwhile Eden’s undercover at a farm where the missing girls were last seen: staving off a couple of lecherous and possibly dangerous guys and trying to fly under the radar.

Interestingly, this novel Eden  is mostly about Hades. So I wonder if the former novel, Hades, significantly featured Eden and her past.

If Fox’s second novel is any indication of the quality of her first I can see why it’s won so much praise. It’s not only well written – it’s an easy read – and the plots draw you in and you’re hooked from the get-go. As for the characters… I struggled a little with Frank. I’m a bit of a black / white person. I don’t mind that Eden possibly kills baddies (Dexter-style) in her time off, but struggle with the notion that Frank stole confiscated drugs and sold them to neighbours. I know that’s a little weird but… we all have our boundaries.

So I’m intrigued and keen to learn more about Eden and her father. The insight into Heinrich’s background was fascinating. I gather that Eden’s is equally intriguing and there’s a little hint at the end of the novel of what might come next.

Eden by Candice Fox, published by Random House Australia will be released on 1 December 2014.

I received a copy from the publisher via NetGalley for review purposes.