I won’t even bother launching into how much I love this series cos I’ve written about it (in general) and reviewed all of JD Robb’s (aka Nora Roberts’) latest In Death books here on the blog.

I felt it wavered a little a few books ago, but it’s most certainly back on track with the last couple being amongst my favourites in the series.


New York at night. A young woman stumbles out on to a busy street - right in front of Lieutenant Eve Dallas and husband Roarke. Her name is Daphne Strazza, and she has been brutally assaulted.

Confused and traumatised, she manages to tell them one thing. Her attacker wore a devil's mask.

As Eve investigates this shocking case, she soon discovers a disturbing pattern. Someone is preying on wealthy couples, subjecting them to a cruel and terrifying ordeal.

Worse still, the attacks are escalating in violence and depraved theatricality. Eve and her team are now in a race against time to find the man behind the mask - before he strikes again. But for Eve, this case in particular has unsettling echoes of her own troubled past...

As I read this it occurred to me Robb excels in giving new readers the backstory they need in just a couple of paragraphs. And I guess the fact this is NUMBER 45 in the series (yes, you read that right and it doesn’t even count a couple of short stories / novellas) means that she’s able to recap easily. And quickly.

And, in case you’re new to the series, her peeps have released this handy little info-thingy. 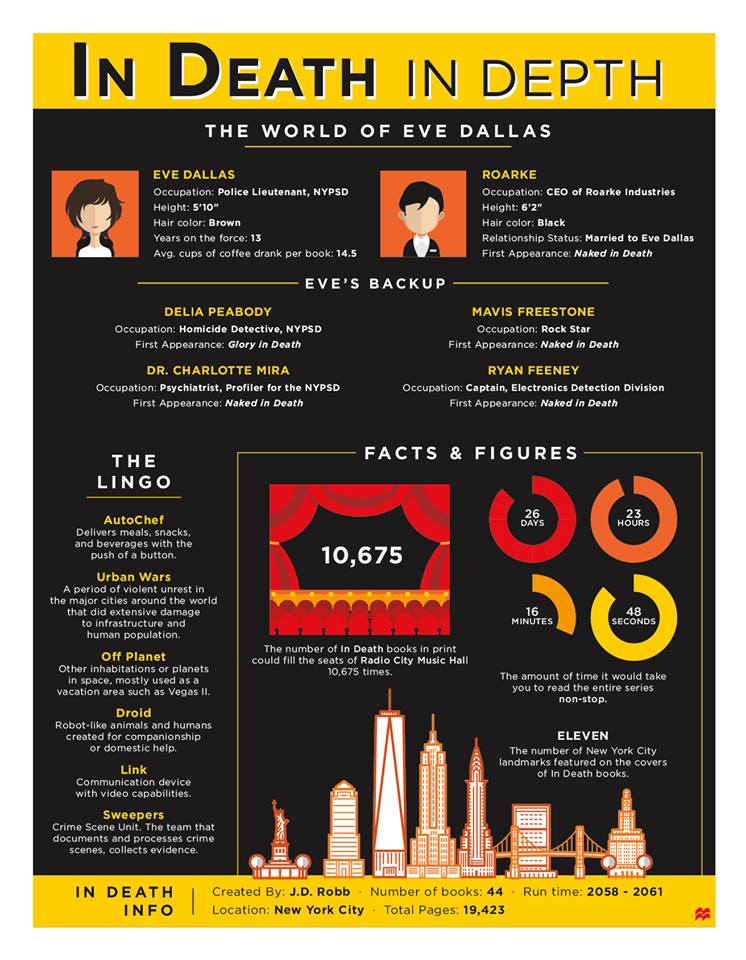 As the blurb notes, Eve and Roarke very literally stumble across this case (or she stumbles across them). Daphne’s story is weird, but when a pattern emerges Eve and her merry band of homicide cop colleagues are on the trail.

Robb’s characters are the biggest selling point in this series and I noted this time how much I also enjoyed those she introduced in this novel – victims of the crime (one-off characters) – and realised she has a talent for luring us in. In her previous book, Apprentice in Death, I commented on the ‘baddies’ – the fact we got to know them well – as Robb put us ‘in’ their heads early in the novel. This one is more of a whodunnit (though I did guess), but again the psychology behind the crimes is particularly interesting.

Again there are glimpses of Eve and Roarke’s private life but (also) again, a little less than earlier books. And… as an aside, Commander Whitney was missing and I’m trying to remember if something happened, or if he was just edited out / not needed this time around.

I was a little worried about this series a few books ago. There seemed to have been minimal character growth and the narrative/s felt a little contrived; however I think Robb is back on track (with more intriguing plots) in her recent releases, and I’m hoping she’s got a story arc in mind for the characters I’ve come to love.

Echoes in Death by JD Robb will be published in Australia by Hachette and out on 7 February 2017.