Early One Morning is Virginia Baily’s second novel. It’s one I wasn’t sure would appeal but I was ultimately won over by the delightfully headstrong female leads who I hoped would get their ‘happily ever after’.

A grey dawn in 1943: on a street in Rome, two young women, complete strangers to each other, lock eyes for a single moment.

One of the women, Chiara Ravello, is about to flee the occupied city for the safety of her grandparents’ house in the hills. The other has been herded on to a truck with her husband and their young children, and will shortly be driven off into the darkness.

In that endless-seeming moment, before she has time to think about what she is doing, Chiara makes a decision that changes her life for ever. Loudly claiming the woman’s son as her own nephew, she demands his immediate return; only as the trucks depart does she begin to realize what she has done. She is twenty-seven, single, with a sister who needs her constant care, a hazardous journey ahead of her, and now a child in her charge – a child with no papers who refuses to speak and gives every indication that he will bolt at the first opportunity.

Three decades later, Chiara lives alone in Rome, a self-contained, self-possessed woman working as a translator and to all appearances quite content with a life which revolves around work, friends, music and the theatre. But always in the background is the shadow of Daniele, the boy from the truck, whose absence haunts her every moment. Gradually we learn of the havoc wrought on Chiara, her family and her friends by the boy she rescued, and how he eventually broke her heart. And when she receives a phone call from a teenage girl named Maria, claiming to be Daniele’s daughter, Chiara knows that it is time for her to face up to the past. 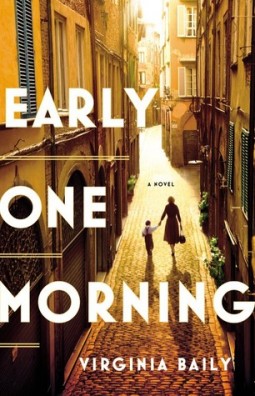 I enjoyed this more than I expected to. I’m not great with historical fiction but this was predominantly set in the 1970s (which in my book is most definitely NOT the distant past!). Daniele’s childhood years unfold via almost alternating chapters… though Chiara’s memories do jump about a little.

The book is well written and offers a sense of hope and positivity, despite its often-tragic subject matter. I noted an early (albeit long) sentence or phrase which captured my attention: (We’re in Rome in 1943 and Chiara’s watching Jewish people being rounded up by German soldiers.)

She is horribly present in this room, now, in this moment. It is as if the damp seepage that, despite the heat of the flames, persists in the hollow of her back, is not rainwater but something else, some residue from a deep pool of human pain. She has been dipped in it, and it coats her. p.15

Chiara is a delightful character and although she doesn’t come across as the passionate or affectionate type, she clearly falls in love with the boy she raises. As an ageing woman she’s witty, feisty and pragmatic all at once.

When we meet Maria she’s a typical 16yr old living in Cardiff with her family until she discovers her real father was an Italian man her mother met while on holidays. I was struck by the fact that Maria’s acting out (on discovering her heritage) was very much the same as her father’s when he discovered his own. And when we learn what became of Daniele, we can only hope the similarity ends there.

I have to admit I never really had a handle on Daniele, although we really only meet him through the memories of Chiara and her friends. (And quite frankly he sounds like an ungrateful brat, so I really—ultimately—cared little about his fate!)

Although I wasn’t tempted to devour this book, I enjoyed it and appreciated Baily’s obvious passion for Italy. I’m also glad to have received some insight into the impact WWII had on the country.

Early One Morning by Virginia Baily was published in Australia by Hachette and released on 25 August 2015.