There are a stack of series I love: John Sandford’s Lucas Davenport and Virgil Flowers books; Martha Grimes’ Richard Jury/Melrose Plant series; Sue Grafton’s alphabet series’; Janet Evanovich’s Stephanie Plum books; and Robert B Parker’s Spenser series. And so forth. And possibly at the top of that list is JD Robb’s In Death series, which I’ve already raved about ad nauseum.

We’re up to number 41 but I pretty much know I can rely on Nora Roberts (writing as Robb) to deliver through tough Lieutenant Eve Dallas and her delightful mega-rich Irish hubby, Roarke.

In this latest outing we meet the bad guys up-front… which isn’t always the case. I usually like a big ‘reveal’ at the end, but I managed to cope with this disappointment with the fortitude you’ve come to expect from me. 😉

Darryl and Ella-Loo are kindred spirits. And not in a good way. Their first killing is kinda accidental but the act (ahem) turns them on so much, it sets them off on a killing spree which involves days of torturing their victims before death.

The FBI have already traced some of the crimes and know they’re after a serial killer/s but Dallas and her team go back further, knowing their earliest crimes will help them find the dangerous duo. 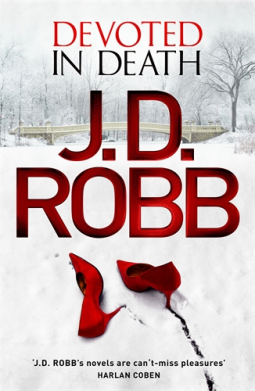 In almost every ‘In Death’ novel, the killer/s end up targeting Dallas, Roarke or one of their friends and I liked that this didn’t happen in this latest novel. There were no ‘Eve in danger’ moments which can (alas) become a bit anti-climatic when you know she’s not gonna actually die.

The pace and anticipation keep us on the edge of our seats (however) because they’re in a race to save the pair’s latest victim and we’re given an opportunity to meet her and become sufficiently invested in her wellbeing to turn pages quickly as if to hasten the arrival of Dallas and her team.

As an aside, I really liked the inclusion of the naive but savvy Arkansas police officer, Deputy Banner and hold a vague hope that he’ll be the replacement uniformed officer Eve briefly mentions in this novel.

Devoted in Death by JD Robb will be released via Little Brown Book Group UK and Hachette Australia on 10 September 2015.