This delightful book was not on my radar until a friend mentioned she’d read several positive reviews about it. I’d received a copy so opened it tentatively… normally eschewing ‘historical’ fiction in favour of psychopathic serial killers. And similar.

However, (un)surprisingly, AJ Pearce’s debut novel – through its characters and charm and beguiling prose – won me over and I lapped it up in a sitting.


London, 1940. Emmeline Lake is Doing Her Bit for the war effort, volunteering as a telephone operator with the Auxiliary Fire Services. When Emmy sees an advertisement for a job at the London Evening Chronicle, her dreams of becoming a Lady War Correspondent suddenly seem achievable. But the job turns out to be working as a typist for the fierce and renowned advice columnist, Henrietta Bird. Emmy is disappointed, but gamely bucks up and buckles down.

Mrs. Bird is very clear: letters containing any Unpleasantness must go straight in the bin. But when Emmy reads poignant notes from women who may have Gone Too Far with the wrong men, or who can’t bear to let their children be evacuated, she is unable to resist responding. As the German planes make their nightly raids, and London picks up the smoldering pieces each morning, Emmy secretly begins to write back to the readers who have poured out their troubles.

Prepare to fall head over heels for Emmy and her best friend, Bunty, who are gutsy and spirited, even in the face of a terrible blow. The irrepressible Emmy keeps writing letters in this hilarious and enormously moving tale of friendship, the kindness of strangers, and ordinary people in extraordinary times.

The writing in this book is Delightful. It’s Quirky and Humorously Irreverent. And in case you’re wondering why I’m doing it…. it’s because Pearce capitalises certain phrases (as you may have noticed in the blurb above).

I pondered upon this initially, but it really works. It emphasises the point but also adds a quaintness that is quintessentially British and… well, very proper. 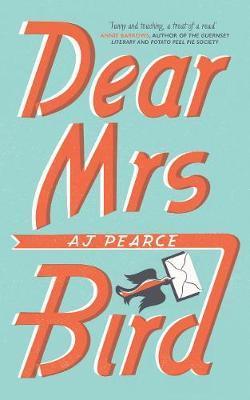 Indeed, even the name of Emmy’s BFF – Bunty – conjured up visions of posh voices and girls’ boarding schools. Though perhaps I’m thinking of a magazine / comic I read as a kid?

I adored Pearce’s writing which shone through via Emmy’s character.

The book’s written in first person from Emmy’s point of view, so they’re her words and her thoughts; and they’re endearing, engaging and just delightful.

By the time I had enthused about how lovely everyone was and how structurally robust the offices appeared, everyone agreed that I had secured gainful employment with a trailblazer for Women In The Workplace and more importantly, for my mother, The Least interesting Target For The Luftwaffe in the whole of London.

‘Woman’s Friend is helping people, which is marvellous,’ my mother said, as if I was giving out half crowns to the homeless. ‘And as we’re stuck with this silly business, at least you girls might as well get careers out of it.’

My mother steadfastly referred to the war as This Silly Business, which made it sound like a mild fracas over a marmalade sponge. That aside, I was lucky to have parents who took the modern view. p 90

Obviously this novel’s set with the backdrop of WWII but Pearce manages to make light of the sombre situation. The pragmatic Emmy talks about the Germans starting to ‘have a go’ at London, for example.

Boots wasn’t the only shop to have taken a biff during the raids. The whole street had had a rotten time of it. The grocer’s was now little more than half a wall and some rubble, four of the flats next door had been completely bombed out and there was just a big gap where Mr Parsons’ wool shop had been. Pimlico may still have had its chin up, but it hadn’t been without loss. p 5

Emmy was a great lead character who engendered my support and admiration. Pearce sends her on a journey and we’re there as she attempts to make the best of everything before her; and we’re (also) there as she wonders if she’s been wrong all along.

Obviously I adored this book. The ending is probably a little too pat, but there’s a dose of reality mixed in with the heartwarming sentiment. This is a fabulously clever and charming debut from Pearce who reminds us life doesn’t always turn out how we want or expect it to, but sometimes that’s for the best.

Dear Mrs Bird by AJ Pearce was published in Australia by PanMacmillan and is now available.