I reviewed Susan May’s first novel, Back Again in 2014 and was particularly impressed at the ingenuity of her plot. I read A LOT of books and she offered up something very unique. And she’s repeated that performance in her second novel, Deadly Messengers.

Freelancer Kendall Jennings writes fluff pieces for women’s magazines. When a horrific massacre occurs at Café Amaretto, she scores an exclusive interview with a survivor. Suddenly, she’s the go-to reporter for the crime.

Investigating veteran detective Lance O’Grady and his partner Trip are tasked with finalizing the open and shut case. Seven people are dead at the hands of an unprovoked killer wielding an axe. It seems simple.

Then another mass killing occurs. This time, arson, and ten eldercare facility residents die in the blaze. Both killers die at the scene. The crimes have no motive, and Lance O’Grady is left wondering how evil can strike twice.

Then it happens again. Even more shocking: a mother with a gun goes on a rampage at a family birthday party.

The killers share one odd detail: none have a murderer’s profile. No history of violence, no connection to terrorists, no vendettas. Ordinary citizens suddenly became killers.

Drawn deeper inside the crime investigation, Kendall finds herself not only clashing with O’Grady but also struggling with old demons. O’Grady resents Kendall’s involvement as her presence provokes memories of a personal tragedy.

O’Grady and Kendall are caught up in a plan greater reaching than the crimes. They just don’t know it. Someone is sending a message. And unless they can decipher the meaning, very soon, many more will die. 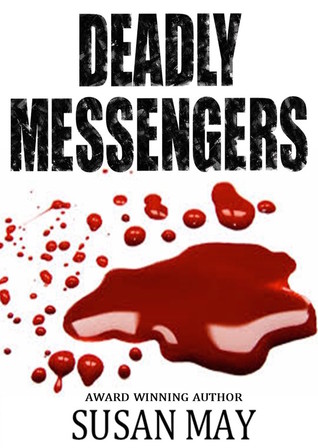 I was a little worried on two fronts as I started reading this novel. Firstly (as a non-fantasy lover) I need my novels to be believable. I had short-lived fears that May had introduced some sort of mind-altering super-powered baddie or something. Thankfully… that wasn’t the case.

Secondly I also zone out if things get overly technical in any specific field. I’m giving a little away, but the novel touches on the pharmaceutical industry and its potential to push drugs (which may have harmful side effects) purely for profit. (And yes, that alliteration was kinda on purpose! 😉 ) #yourewelcome

Thankfully again… just when I started to worry I was going to be overwhelmed with the complexities of SSRIs (antidepressants) and conspiracy theories involving the pharmaceutical industry, May pulled back.

So although there are a range of complex motivations behind these killings, the brutal attacks are given a very human face.

I found myself quite drawn to Kendall and her character was well-developed and relatable. I wasn’t quite as engaged with O’Grady, though guess he’s also meant to be more of an enigma.

The book was well-paced and I easily read it in two sittings. And… (fortunately) the climax doesn’t disappoint.

Deadly Messengers by Susan May will be out in late September.

I received an electronic copy of this book from the author for review purposes.