I’ve reviewed a few of Lisa Unger’s novels here now and each time I mention that I’m a fan of her work and have pretty much read everything she’s published.

It’s a case of life imitating art for Ian Paine. Or wait, should that be art imitating life? 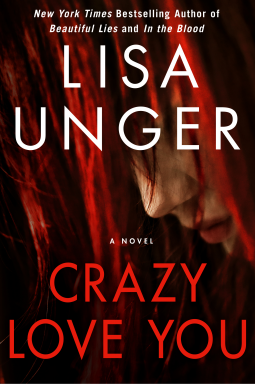 Ian’s a successful graphic novelist with a series, Fatboy and Priss  which is loosely based on his own life. Chubby as a child, 10 year old Ian was friendless until he met Priss. They became friends and Priss saw Ian through some rough times, including family tragedies.

Twenty years later Ian is a world away from his childhood home in The Hollows. His success has set him up in a trendy New York loft where he happily spends most of his time drunk or stoned and engaged in a casual on-again / off-again destructive relationship with Priss; the latter having the knack of appearing when Ian’s at his most vulnerable.

Until one day he sees Megan. Megan’s sweet and earnest and Ian can’t help but fall in love with her. Despite knowing they’ll incur Priss’s jealous rage.

And before he knows it Megan’s life has been put at risk and Ian’s own world is spiraling towards the point where redemption will be impossible.

Crazy Love You  is another book which is hard to discuss at length without giving too much away.

Ian’s a frustrating lead because of his unhealthy co-dependence on Priss and constant self-sabotaging behaviour. You really want to slap him around the head a bit. (In the nicest possible way.)

I felt Megan occasionally came across as a bit too much of a princess at times (which I’m sure Unger’s done on purpose – although it grated a tad), however the way in which she got sucked back into her relationship with Ian gave her character some substance.

Unger cleverly spins this tale so we don’t exactly know what’s happening. I’ve mentioned in recent reviews of Fleur Smithwick’s How to Make a Friend  and SK Tremayne’s The Ice Twins,  that there are some similarities between these three novels. And it’s bizarre I seem to find myself reading books with a similar undercurrent or theme.

Because I’m more of a straight suspense / thriller / crime fiction lover I didn’t appreciate the last quarter of the book as much as others most-certainly will. As in Tremayne’s The Ice Twins,  Unger takes this book to a different ‘place’ – one with which I struggle.

However, that aside, it’s one of those books which will keep you pondering for days (or sleepless nights) after you’ve turned the last page. Even now I find myself wondering exactly ‘who’ did ‘what’. Something which will make more sense once you’ve read the book – which you absolutely must do!

Crazy Love You by Lisa Unger will be released by Simon & Schuster Australia on 1 February 2015.

I received an advance copy of this book from the publisher for review purposes.