I really enjoyed Michael Robotham’s 2014 stand-alone thriller, Life or Death. I admitted at the time I had been struggling with his series featuring psychologist Joe O’Loughlin, so the change gave me the respite I was looking for.

I didn’t find O’Loughlin as unlikeable as Nicci French’s Frieda Klein, but I really wasn’t really engaging with his character and couldn’t get a handle on who he was.

However Robotham’s latest (and the eighth in the Joe O’Loughlin series), Close Your Eyes sees a return to the Joe I thought I once knew.

A mother and her teenage daughter are found brutally murdered in a remote farmhouse, one defiled by multiple stab wounds and the other left lying like Sleeping Beauty waiting for her Prince. Reluctantly, clinical psychologist Joe O’Loughlin is drawn into the investigation when a former student, calling himself the ‘Mindhunter’, trading on Joe’s name, has jeopardised the police inquiry by leaking details to the media and stirring up public anger.

With no shortage of suspects and tempers beginning to fray, Joe discovers links between these murders to a series of brutal attacks where the men and women are choked unconscious and the letter ‘A’ is carved into their foreheads.

As the case becomes ever more complex, nothing is quite what it seems and soon Joe’s fate, and that of those closest to him, become intertwined with a merciless, unpredictable killer . . . 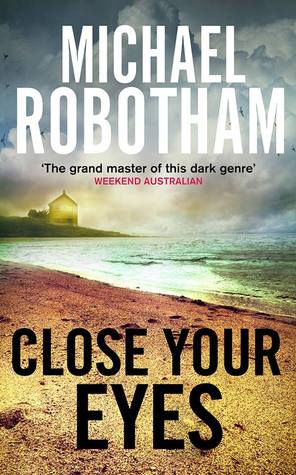 Robotham always includes a tantalising amount of personal stuff, as well as the detective stuff and (like I said), it hasn’t always worked for me in Joe’s case. However (in this instalment) Joe’s engagement with his family felt familiar and real—and he seemed less self-absorbed and selfish than I’d decided he was becoming. Perhaps Robotham’s written him that way on purpose… indicating (back with his family) is where he’s himself the most. Who knows…

But Joe was again full of astounding insights as a clinical psychologist delving into the mind of a killer and more centred and selfless as a father and husband (ish) whose family needs him.

The book’s well written and consistently paced. We’re in the perpetrator’s mind in snippets throughout the novel, so privy to why they’re doing what they’re doing and what they’re planning. There’s a scene in particular in which the killer is watching over his prey which is very cleverly written.

I didn’t really guess who’d done it until the ‘nail-biting’ finish (sorry, had to throw in a cliche!). And… just a hint—there’s a major plot twist in this book, so if you’re a fan of the series you REALLY don’t want to miss this one!

Close Your Eyes by Michael Robotham will be released in Australia by Hachette on 6 August 2015.