Charlie, Presumed Dead by Anne Heltzel is the kind of book you throw across the room when you finish reading it. Not because you hated it, but because you’re bloody frustrated. It’s also the kind of book which you need to mull over later—at night when you can’t sleep—so you can pick stuff to pieces and make yourself feel better.

“In Paris, family and friends gather to mourn the passing of Charlie Price, presumed dead after a horrific accident. At the funeral, his two girlfriends—Lena and Aubrey—uncover their boyfriend’s shocking betrayal. Charlie led a double life, and they are the casualties.

Over the course of a week, the girls embark on a mind-bending search for answers. Is Charlie still alive? What else was he hiding? As a trail of Charlie’s deceptions carries them across Europe and Asia, the girls’ deepening friendship sustains them. The truth is within their grasp—but when they each discover that the other has been harboring secrets of her own, will their own lies destroy them?” 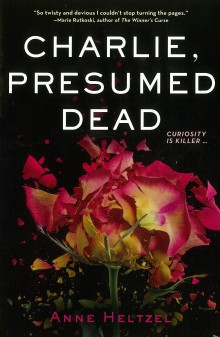 I turned the last page of this novel thinking there had to be more. It COULDN’T end like it did. I was in denial. “No no no no!” I told myself and the empty bathroom. “It’s not fair! It’s not right!”

I’m all about justice you see. I also believe in karma and fate and all of that, but above all THINGS MUST BE FAIR.

But enough ranting for the moment.

Heltzel did a good job with our two leading ladies. We get to know Aubrey and Lena well and spend alternating chapters in their heads. Both girls have their secrets and although they eventually bond they still hold back.

I actually don’t know too many 18 and 19 year olds like them, but I guess they exist. And I guess some of their ‘troubles’ are brought on by their age and naivety. Charlie, Presumed Dead is ostensibly branded as a YA (young adult) novel, which is probably why forty-something year old me kept thinking, “Oh god, I can’t believe they’re doing this!”

We’re occasionally in Charlie’s head via a few chapters here and there but I’m not sure I got a good idea who he was. We kinda learn WHY he was like he was (ie. somewhat sociopathic, but was there more?) though later discover the source wasn’t particularly credible.

I was obviously intrigued enough by Aubrey, Lena and Charlie’s tale that I was transfixed by this book. Indeed, it wasn’t until after that I pondered the various elements and identified a few plot holes / things which may (or may not) have been feasible.

I wondered, therefore if my frustration on finishing the book was because it didn’t end how I wanted (the whole fairness thing) or because it wasn’t entirely logical. My little methodical mind imagines a private detective picking through the girls’ trail and the ending unravelling pretty quickly.

However… for the most part I enjoyed this novel and I already know I’m gonna be thinking about it for days. And days.