After starting a few series part-way through (some more successfully than others), I’m excited to have been able to read the first in a new series. Of course I hadn’t realised that when I requested Broken Promise. I love Linwood Barclay and the plot sounded interesting so it wasn’t until it arrived and I checked Goodreads, I discovered it referred to as Promise Falls #1.

And what a fabulous first-in-a-series it is! Like David Baldacci’s (recent) Memory Man, I enjoyed this so much I’m eagerly awaiting more in the series. 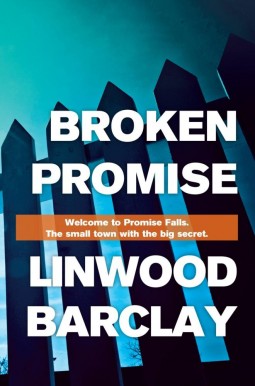 David Harwood’s life hasn’t turned out the way he expected. At 40 he’s unemployed and back in his parents’ house with his 9yr old son Ethan.

His wife died 5 years earlier and after throwing in a well-paid editing job in Boston to spend more time with his son he’s moved back to Promise Falls. He planned to look for a place to stay after settling into his new job with the local paper but when it closed down on his first day he found himself out of work and worrying about the example he was setting for his son.

As a favour to his mother David drops into his cousin Marla’s place with some home-cooked meals. Marla, he knows, has been struggling since she lost her baby 10mths earlier and gets little sympathy from her own mother who’s frustrated at her daughter’s inability to move on. On arriving at Marla’s however, David finds her busy with her son… who she informs David was dropped off by an angel the day before.

Things get complicated when David discovers contact information with the bloody (#notswearing #forachange) baby’s pram and arrives at the address to find a mother murdered and child missing.

He can’t believe Marla’s capable of such violence and finds himself believing her story about the angel so sets about trying to prove her innocence. 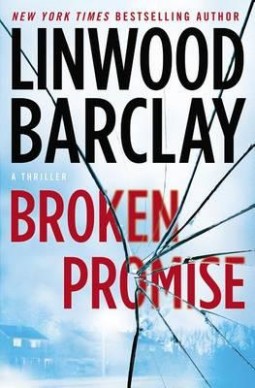 There’s a lot of other stuff happening in the background but it adds a lot of flavour, rather than confuse readers. David’s mother seems to be sliding slowly into dementia and his father is hiding some past secret. His son’s being bullied and David finds himself attracted to the bully’s mum… a woman on the run from a violent husband.

And then there’s local detective, Barry Duckworth, celebrating his 20th anniversary with the Promise Falls Police Department. Not only is he dealing with a former disgraced mayor (Randall Finley) who’s planning another stab at the title and wanting Barry on his side; but there are some troubling incidents around town and possible attacks on young women at the college campus.

Like I said, there’s a lot going on… but Barclay’s obviously setting the scene for future novels in this series. It’s got that small town drama-filled feel about it. I even noted that Barclay’s writing felt very folksy… in a good way, inviting readers into Promise Falls, resplendent with interesting characters and idiosyncrasies.

I’m assuming David and Barry will continue to be key characters in future novels and having solved the mystery of Marla’s baby David’s about to start working for mayoral wannabe Finley and we (like he) just know that will prove interesting.

Broken Promise by Linwood Barclay is published by Penguin Group and released in Australia by Hachette and available from 28 July 2015.