Goodreads not-very-reliably tells me Breaking Creed  is the first Alex Kava book I’ve read. I know this isn’t true as a character featured in one of Kava’s series (Maggie O’Dell) is very familiar to me. Well that and I have two of Kava’s books sitting on my bookshelf!*

However, I’ve got a niggling feeling I’ve read a more recent book by Kava which introduces dog handler extraordinaire Ryder Creed in some minor way. Perhaps I’m getting it mixed up with something else… but I’d swear I (fairly recently) read a book which featured a search and rescue dog trainer.

Anyhoo… Ryder’s a former marine who takes in strays and unwanted dogs and – akin to a dog whisperer – turns them into K9s able to undertake a huge array of search and rescue tasks. 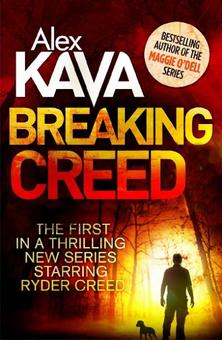 There are a few threads at play in Breaking Creed.  Firstly we meet 14 year old Amanda, who was taken in (yes, literally and figuratively!) by drug runner Leandro to work as a drug mule swallowing dozens of condoms of cocaine and travelling regularly between Colombia and the US.

Then there’s Ryder (and his beloved Jack Russell Grace) who is/are assisting the Coast Guard search a vessel they’ve assumed is carrying drugs.

And finally we revisit FBI Agent Maggie who’s inexplicably asked to look into a dead body which seems to have no relevance to her role hunting down serial killers.

I won’t give too much away but – it’s fairly obvious that the three plots will collide in some calamitous way. And they do. Kinda.

Breaking Creed  is the first in Kava’s new series featuring Ryder Creed. He’s the perfect hero: slightly flawed and pig-headed but devoted to his work (and the dogs he trains). And… well, he’s a nice guy. We meet a few other characters in the first of this series including Creed’s (K9 CrimeScents) business partner Hannah and newcomer to their stable of employees – ex soldier Jason.

There were a few plot holes and it was a tad predictable, with everything wrapping up a bit too tightly and attractively at the end, but I easily soaked up this novel and read it in a sitting.

It’s another solid offering from Kava (who incidentally I’d assumed was male, though not sure why!) and I look forward to future novels in her series featuring Creed.

Breaking Creed by Alex Kava, published in Australia by Hachette is available from 27 January 2015.

I received a copy of this book from the publisher (Hachette Australia) for review purposes.

* I only started tracking my books in Goodreads a couple of years ago!