You’ll be happy to know I’m slowing rediscovering my reading mojo – although in all honesty it was only ever on a holiday. Not lost.

However it’s been a hot week in parts of Australia (at 33-40C / 90-104F) and very humid, so I must confess my evenings have been spent more in front of TV in my air-conditioned living space, than in the bathtub where I read.

I started the week by finishing off CJ Carver’s Tell Me A Lie – the second in a series about a former MI6 agent whose amnesia means he remembers nothing of his time as a spy.

I then allowed Candice Fox’s new release, Crimson Lake, to leap to the top of my TBR pile. I loved Candice’s series about Eden Archer (et al) and am hoping this – about a disgraced detective and a quirky convicted murderer-turned PI who are investigating the disappearance of a writer – becomes a series.

And finally I read Rattle, a slightly macabre thriller, by debut author Fiona Cummins. Both Crimson Lake and Rattle aren’t out until the end of the month so I can’t publish my reviews until then…

I only reviewed a couple of books, Tell Me A Lie by CJ Carver, and Kill The Father, by Sandrone Dazieri. But I also interviewed Christine Dibley, author of To The Sea and was particularly interested in the debut author’s switch to a writing career after a long one in the human services industry.

I joined a link-up to write about the idea of a ‘word of the year’ and then contemplated the notions of contentment vs happiness vs joy. #asyoudo

My 8th bloggiversary came and went with no fanfare. Which is to say I forgot all about it. Although I wasn’t really blogging about books then, my first post (on 9 January 2009) was a book review of sorts: Josh Hartnett Definitely Wants To Do This . . . True Stories From A Life In The Screen Trade. But the post was more about hearing Bruce Beresford speak and share some stories about his film-making history.

I’m continuing my Netflix fascination and watched Dirk Gently’s Holistic Detective Agency this past week. I didn’t LOVE love it and am not really a fan of Douglas Adams, but will definitely tune in for the next series. 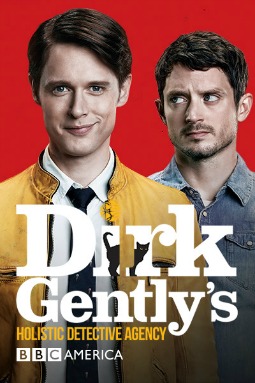 I must have gone on a NetGalley-requesting rampage because I’ve had several come through in the last or so. I shouldn’t show any favouritism but I’m excited by what will be my next read, Gregg Hurwitz’s The Nowhere Man. The first in the series, Orphan X, was one of my favourite books last year so I’m looking forward to number two. Though NOT trying to heighten my expectations TOO much!

And that’s about it for this instalment of my books, reading and blogging news.

Have you been doing any reading? Do any of my books appeal?

As usual I’m linking up with Kimberly from The Caffeinated Book Reviewer and Kathryn from The Book Date.