I have to admit I’m not entirely sure I like Michael Robotham’s Joe O’Loughlin. I don’t hate him, but… my reaction to him reminds me a little of my feelings for Nicci French’s Frieda KIein.

I don’t expect infallibility in my protagonists but, well… sometimes my #mehness makes it a bit harder to care about their fate. That’s not to say I want anything bad to happen to the psychologist, though thankfully I know Joe is gonna hang around for a while as I’ve already read the fourth, sixth and seventh in Robotham’s series (and possibly the 3rd!!!).

Of course, along with his amazing ability to ‘read’ people, Joe’s redeeming feature is that he does try to do the best by his patients and he adores his family.

Mulholland Books has recently re-released two early Robotham novels, The Suspect and Lost, which has given me a chance to go back and find out exactly how Joe came to be involved in police cases and friendly with Detective Vincent Ruiz.

And what I discovered was… in reality he seems to have fallen into that role, having been a suspect in a series of killings in (you guessed it!) The Suspect. 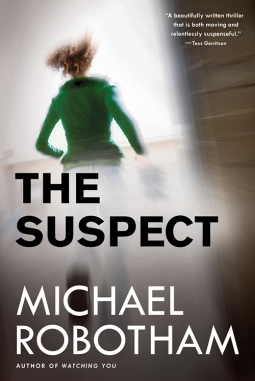 Joe’s recently been diagnosed with Parkinson’s and grappling with that knowledge, as well as his wife who’s desperate to have another child and a few difficult patients; when he comes to the attention of local law enforcement.

Initially approached for his opinion about the unidentified body of a woman, Joe realises he knows the victim and soon an increasing number of clues are pointing in his direction.

Joe’s only chance to escape arrest is to find the killer himself which means working out why he’s being set up!

Joe’s first outing is a solid start to the series by Robotham. We learn the killer’s identity pretty early, but much attention is then given to working out the why, and how to prevent further bloodshed.

In Lost our attention turns to homicide Detective Vincent Ruiz. Although he played a bit of a bastard in Robotham’s earlier book we’re actually living through his eyes in the second installment in the series.

Ruiz is only semi-conscious when fished out of the Thames. He’s got a gunshot wound to the leg and remembers nothing of the lead-up to the shooting. 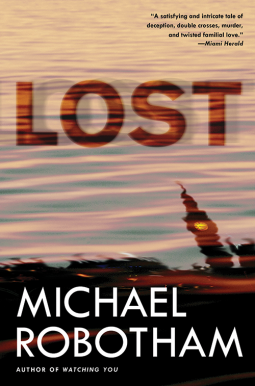 Discovering he wasn’t working on an official police case Ruiz realises he was pursuing a missing persons / murder case from years before.

Three years earlier 7-year old Michaela Carlyle went missing from the apartment building where she lived with her mother.

Unable to remember why he was (again) looking into Mickey’s disappearance or why he was shot Ruiz relies on Psychologist (and now friend) Joe O’Loughlin to help him recover his memories.

Slowly unpicking his scrambled mind Ruiz discovers that kidnappers claimed to have Mickey and offer to return her in exchange for a ransom.

Complicating matters is the fact that Mickey’s (estranged) father and organized crime boss – while paying the ransom – seems equally intent on violence and retribution. And then there’s the question of whether Mickey is really alive and where she’s been all of this time.

I must confess I wasn’t overly interested in the detail afforded the sewers and tunnels in the novel so *may* have skimmed that part but don’t think it was detrimental! 😉

Again ‘part’ of whodunnit is revealed early on, but there were a few twists and turns to keep us guessing!

More importantly, I liked O’Loughlin much better in this novel – playing the caring friend and offering up vital insight when required. It made me realise that (to the best of my memory) the entire series is told from varying viewpoints. (I recently reviewed the seventh in the Joe O’Loughlin series and it’s actually told from the perspective of Joe’s client – the central character in the novel.)

I read the 4th and 6th books in the series before I was writing reviews so am now not entirely sure what I thought of them, but to base a series around someone who’s involved to varying degrees is an interesting approach. Switching perspective has its benefits – as I said, I found Joe far more likeable in Lost than I did in The Suspect. However, as I’ve read some earlier novels several years apart I don’t think I realised they were part of a series and hadn’t really remembered Joe as a central character.

However, viewpoint aside, which I do really appreciate is that Robotham is producing consistently good crime fiction with inspired and original storylines.

The Suspect and Lost have been re-released by Mulholland Books and are currently available. The seventh in the Joe O’Loughlin series, Watching You was released in 2013.

* I received advance copies of these books for review purposes.

I’m also linking up with the Aussie Author Challenge to review Australian authors.