I’ve been reading and reviewing a lot of books lately. I’ll share them here as much as possible, but check out my Goodreads page for all of my reviews.

The Bequest by Mike Farris

We meet Leland Crowell just before he throws himself off a cliff. A wannabe screenwriter, Leland has bequeathed his final screenplay to the once-famous actress, Teri Squire who – despite two Oscars – is about to be dumped by her agents after a series of flops. 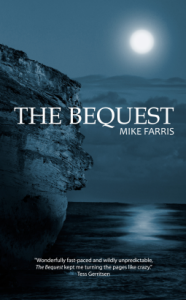 Teri’s uninterested in the strange bequest which is handed to her by Leland’s rather odd mother Annemarie, but after the media shows some interest in the story she realises it may turn her flagging career around.

Two years later and Teri’s on ‘The Precipice’ of a comeback, thanks to Leland’s screenplay of the same name (hee hee), when a man appears claiming to be the supposedly-dead Leland and wanting his share of the action.

Things get complicated when the movie’s (somewhat unsavory) investors show they’re determined to let nothing get in the way of their profits.

I mostly enjoyed this novel. In fact, I read it in a sitting. There’s lots of action which keeps the novel moving at a quick pace. The myriad of characters also add some texture to the plot. I was also sufficiently intrigued about Teri’s backstory to want to keep reading.

**** SPOILER!!!! – the ‘two’ baddies seemed a bit over-the-top and I would have been happy if there’d just been one unfolding plot to follow (ie. the screenplay and its repercussions). ****

The Bequest by Mike Farris is being released by Stairway Press on 3 December 2013.

Run to Me by Diane Hester

Sometimes damaged and tormented souls find each other and that’s exactly what happens in Diane Hester’s book, Run to Me.

Shyler O’Neil’s son Jesse was killed in tragic circumstances which she – two years later – continues to relive. Shyler’s lost her friends and family and hides away from human contact in a remote cabin in the woods. She manages to attract the attention of the town’s new doctor however, who is intrigued by his beautiful but elusive and obviously haunted new patient. 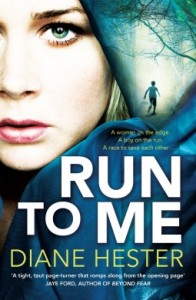 At the same time, three boys are being pursued by a gang of thugs who believe they’ve witnessed a crime. The oldest Zack, though only ten, has taken it upon himself to protect his two younger foster brothers as they try to elude those out to hurt them.

Eventually the boys are separated and Zack happens upon Shyler and – in her confused and unraveling state – she believes him to be Jesse and is determined to save him (this time!) from his pursuers. Concerned about his protector, Zack plays along… worried about what might happen if/when Shyler realises he’s not her son after all.

This is a debut novel from author Diane Hester and it moves at a great pace throughout. I’m not usually a fan of ‘on the run in the wilderness’ novels, but thankfully that wasn’t the focus of Run to Me. Rather it focused on Shyler and Zack (as Jesse) and the emotional baggage that each has brought with them.

Because I’m such a sook I shed a few tears at the end but I’ll keep you guessing and won’t tell you if they were happy or sad tears. You’ll have to read the book for yourself!

Run to Me is currently out in Australia via Random House and soon to be released in the US.

* I received copies of these books for review via their publishers and NetGalley.