It doesn’t seem that long ago that I wrote about Mo Hayder’s Poppet and yet we’re already being presented with her next offering.

And, as is most-often the case, Hayder’s new release Wolf  is a really interesting read and offers we readers something a little bit different.

Immediately on arriving home Matilda heads to her beloved garden and is confronted with a horrible reminder of the past – a vicious murder which took place 14 years earlier.

Matilda, Oliver and Lucia retreat to the house to find their phone lines cut and discover they’ve lost contact with the outside world… until two police officers knock on their door in a bizarre coincidence. 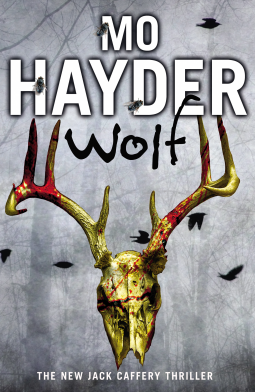 Of course, DI Jack Caffery also features in Wolf – still trying to find out what happened to his brother all those years ago and now with new clues he’s relentlessly pursuing. Caffery’s drawn into the Anchor-Ferrers’ plight though, in the strangest of ways.

I was obviously invested in the storyline as I found myself frustrated with the pace of Caffery’s investigation. I wanted him to bloody solve the mystery before it was too late for the Anchor-Ferrers family.

Hayder really put me in Oliver’s head and I was with him as he tried to understand what was happening: was the situation linked to the murders almost 15 years before; or was his work on the invention known as ‘Wolf’ to blame?

Although there were a few unexplained coincidences I loved the final twists and shed a few (dozen) tears.

Incidentally (and as an aside), the novel starts a bit like an episode of Law & Order SVU in that it kicks off through the eyes of those who don’t go on to play any particular role in the book (like the arguing lovers who happen upon a dead body in an alleyway or someone jogging through a park  who stumbles over a rape victim).