I’m not sure if I was scarred by Sweet Dreams novels while at school or my grandmother’s Mills & Boon (in my late teens), but I don’t really read romance novels.

I can however, cope with a teensy bit of romance intermingled with my fave crime fiction / mystery / thriller genre. Indeed, I quite enjoy the likes of Suzanne Brockmann, Sandra Brown, Karen Rose and even JD Robb. Which is why I requested Kendra Elliot’s latest novel, Vanished from her publisher (and Amazon Publishing imprint) Montlake Romance.

And fortunately on the whole there were no sickly sweet romance or dodgy sex scenes. (Well, there was one… but I glossed over the quivering, shuddering and devouring and survived relatively unscathed!) 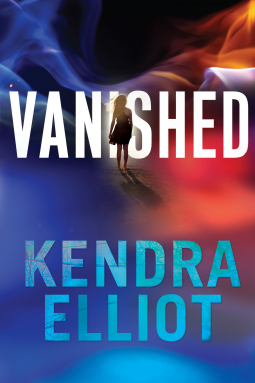 He’d once had a soft spot for the earnest prostitute but it seemed in the months since he’d last seen her she’d developed a nasty meth habit.

Unable to be directly involved in the investigation into Josie’s death Mason’s then sidetracked by the kidnapping of his ex-wife’s 11 year old step-daughter (and step-sister to his son Jake).

Henley was on her way to school when she disappeared and Mason offers his services to his ex Robin, her husband and Henley’s mother to liaise between the family, FBI and media.

Also on the case is Special Agent Ava McLane, who’s annoyed when (as the token female) she’s appointed to act as a family liaison rather than participate in the investigating team, but she soon adapts to the role and finds herself involved in the complicated family dynamics.

Mason and Ava hit it off (naturally!) and having an FBI agent on his side is useful as – on leave to assist his family – the Oregon police discover mounting evidence that Mason himself was involved in Josie’s murder.

As the FBI and police try to understand the motivation behind Henley’s kidnapping, it soon becomes obvious that she may only be a pawn in a bigger game.

Vanished was an enjoyable read. A tad predictable once you guessed the underlying motive, but entertaining nonetheless.

As a complete aside, but interestingly, on her site Elliot mentions that it was ‘having a go’ during national novel writing month (NaNoWriMo) which actually kickstarted her writing career.

Vanished by Kendra Elliot, published through Amazon Publishing’s Montlake Romance imprint will be available from 17 June 2014.

I received an advance copy of this novel via NetGalley for review purposes.