Beth O’Leary’s The Flatshare was one of my THREE favourite books of 2019. Unfortunately – and unfairly for her – it meant she had a lot to live up to with the release of her second book.

Fortunately for her (and thankfully for me), O’Leary certainly didn’t fall into the dreaded second-book trap (ie. in which it’s a disappointment: either an ‘actual’ disappointment, or just in comparison to the debut) as I was absolutely smitten with her new novel, The Switch.

I read it over two nights – which is unusual for me as I’m normally all about instant gratification. However, I had to put it aside on the first night and returned to it the next and….  those who know me would have seen my tweet (below)… I was enjoying it so much that I didn’t want it to end.


When overachiever Leena Cotton is ordered to take a two-month sabbatical after blowing a big presentation at work, she escapes to her grandmother Eileen's house for some overdue rest.

Eileen is newly single and about to turn eighty. She'd like a second chance at love, but her tiny Yorkshire village doesn't offer many eligible gentlemen.

Once Leena learns of Eileen's romantic predicament, she proposes a solution: a two-month swap. Eileen can live in London and look for love. Meanwhile Leena will look after everything in rural Yorkshire. But with gossiping neighbours and difficult family dynamics to navigate up north, and trendy London flatmates and online dating to contend with in the city, stepping into one another's shoes proves more difficult than either of them expected.

Leena learns that a long-distance relationship isn't as romantic as she hoped it would be, and then there is the annoyingly perfect - and distractingly handsome - school teacher, who keeps showing up to outdo her efforts to impress the local villagers. Back in London, Eileen is a huge hit with her new neighbours, but is her perfect match nearer home than she first thought?

I actually only have an early copy of this which I received months ago, but saved until closer to publication date (as I suspected I’d want to review it as soon as I read it!). It means I’m not supposed to include quotes in case things changed (although I’m going to add one! #sorrynotsorry). It also means the cover of my copy of my book differed from the final version. And in reality it’s kinda quirkier cos it has a door on the front and back cover! 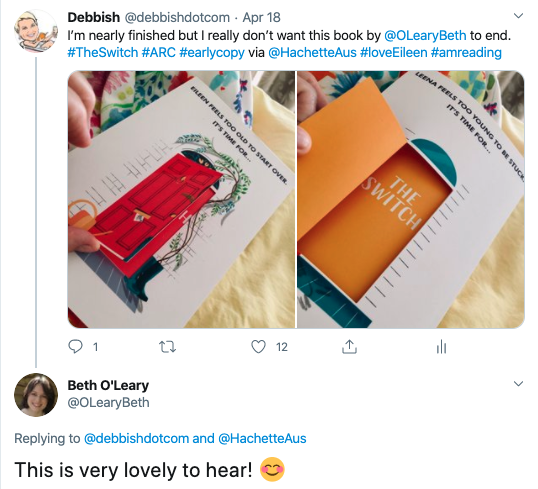 I loved O’Leary’s writing. As in The Flatshare it’s easy and accessible and (in a very good way) I barely noticed it after a while as I was completely beguiled with the characters and story. Nevertheless it’s witty and makes the read fly by.

The Hamleigh Neighbourhood Watch is an unofficial association, but a thriving one. Crime is something that very much concerns the inhabitants of Hamleigh-in-Harksdale, despite the fact that in the last five years the only crime I remember occurring was the theft of Basil’s lawnmower, which turned out to have been borrowed by Betsy who swears she asked Basil first. Whoever you believe, it’s hardly an epidemic of illegal activity, and a weekly two-hour meeting is almost certainly a bit much.

Thankfully, I am now in charge of the Neighbourhood Watch, with Betsy as Deputy Watcher (it was agreed that Betsy could not be Lead Watcher, given her aforementioned criminal history). We’ve made the meetings much more interesting. Since we’re not technically a Neighbourhood Watch, just people who like watching our neighbours, there’s no need to stick to any rules or regulations. So we stopped pretending to talk about crime, and just focused on gossip, village scandal, and complaints about rival boroughs. p 29

Leena is named after her grandmother, Eileen and both are delightful. But it’s 79yr old Eileen who had me smitten. I adored her. I mean, I really liked Leena and was invested in her ‘journey’ (again, #sorrynotsorry). I think you can see where her story is going. And I’ve certainly been there. Albeit without the boyfriend or fun flatmates. She’s in a high-pressure job and it’s all-consuming. She doesn’t stop to navel-gaze and it takes something quite shocking for her to pause and consider the life she’s living.

Eileen’s husband’s recently flitted off with their dance instructor though she feels shame more than loss. I guess that says something about their marriage and it’s kinda sad she / they stayed in it for so long. I loved that she’s ready to get back on the horse (or is it bike?) and making a list of eligible men in the village (including their potential sexual prowess) when she and Leena decide to make the decision to switch places.

Thankfully it’s not a Freaky Friday kinda scenario, though Leena is forced to step into her grandmother’s shoes (literally!).

Leena’s time in the village could have been clichéd. Indeed, I loved that Jackson (local school teacher and potential romantic interest despite Leena’s boyfriend) actually calls her on it – likening her arrival in Hamleigh and involvement in her grandmother’s committees to a Hallmark Christmas movie in which a New Yorker visits a small American town expecting to win over the hearts and minds of the locals.

Similarly, O’Leary avoids any clichés as Eileen settles into life with Leena’s flatmates and starts online dating. Perhaps I’m accustomed to my 76yr old mother’s friends but I was certainly surprised at the lack of reticence Eileen showed when it came to jumping into potential new relationships. Most of my mother’s friends (widowed however) tell me there’s nothing they’d want less than have to get used to (ie. house-train) a new partner!

We can kinda see where this is going to go, but I loved the trip nevertheless.

Of course there’s more to this story. We learn quickly that Leena has lost someone close to her and – as a result is estranged from her mother. It puts Eileen in an awkward position, supporting both her daughter and granddaughter.

I loved where O’Leary takes us on the mother / daughter journey. Leena’s mother / Eileen’s daughter (Marian) plays a small but pivotal role. And I wept. A lot. As a 52yr old with a 76yr old mother I could certainly relate to some of the scenes in which Marian worries about her emotional dependence on her mother and the fact Eileen still worries about her middle-aged daughter as much as she did when she was a child.

This book is simply a delight and I cannot recommend it highly enough.

The Switch by Beth O’Leary will be published by Hachette Australia on 28 April 2020.

I received an early copy of this book from the publisher for review purposes.